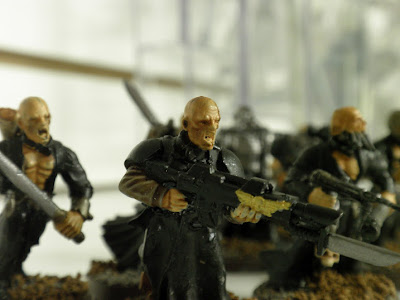 In Warhammer 40k one of the defining rules that effects us every time we play is Missions. How are they handled, what deployment zones will our armies face, and what will be our objectives.

This series deals with that and a lot more. A big thanks to our "anonymous source with a book", he has been a big help. I know he is tired, and him and I are very different time zones (8hours), so it was gracious of him to spend the time to answer our questions here on Faeit 212.

In each type you must deploy more than 12” from the center line (e.g. 24” between deployment zones

Setting up the battlefield – Either set up your battlefield to create a narrative, OR all fortifications placed first, alternate fortification deployment. Roll a D3 for each 2’ by 2’ section, this is “terrain density”. Place terrain until number of pieces (including fortifications) is equal to terrain density limit. Alternate which player deploys which piece of terrain, feel free to deploy for your advantage (this is fluffed away by saying savvy commanders pick their battlefield to give their army an advantage). I can’t see any recommendations for size of piece of terrain but then there are a lot of rules for terrain and I haven’t had time to read them all thoroughly

Place objective markers (as per mission type you rolled). These should be 1-2” in diameter. No objective within 6” of battlefield edge of within 12” of another objective, none to be placed in/on buildings, fortifications or impassable terrain. Some interesting special rules on objectives – called “mysterious objectives”, used in some missions. There are all sorts of random effects that can occur with objectives from them exploding to giving the unit controlling them skyfire to creating a gravity wave which halves charge distances.

Deployment;
Determine warlord traits – choose one of three categories and roll a D6
Deploy forces; player with first turn deploys all their units in their deployment zone, then player two deploys all their units. You may deploy within a fortification. Then infiltrating/scouting moves occurs.
Then sieze the initiative –as in 5th
Variable game length, same as 5th

Victory conditions;
Primary objectives; depends on mission (discussed later)
Secondary objectives; same for every mission each gives 1 victory point;
• Slay the warlord (as it sounds)
• First blood (first unit to be removed)
• Linebreaker (ending the game with one of your units in opponents deployment zone)

Troops are scoring units. Other units can be made scoring with special abilities, mission types, etc… cannot claim/deny(contest) an objective if embarked on transport or if falling back
Mission types: (VPs are always counted at the end of the game; i.e. you get the points for controlling it on the final turn, it doesn’t matter if you controlled it turns 1,2,3,4)

2. Purge the alien: No objective markers. Each player receives 1VP for each enemy unit that has been completely destroyed. All three secondary objectives

4. The Scouring: 6 objectives placed upside down with numbers written on them, 1 has 4, 2 have 3, 1 has 1. after sieze the initiative flip the markers over. Each marker is worth the number of points written on it. You also get 1 point for each fast attack killed, fast attacks are scoring, even if vehicle, as well as troop choices. Secondary objectives, mysterious objectives

6. The Relic: rules for this are complex. There is a single objective in the middle of the field. Worth 3VP to the player who controls it. A model in a scoring unit can pick it up and move it away. That relic can never move more than 6” per turn (so you can’t run, etc..) while carrying it and it can’t go on flyers (they will crash if they can only go 6” :D). Secondary objectives.

Forgeworld, imperial armour, and other expansions: in the back of the book there are a few one/two page summaries of each of the official expansions (including forgeworld), but no indication that these can be used in normal games or without your opponents consent.


pistols still give +1 attack (in CC), but you do not use the pistol's S and AP to resolve the attack, you use the CC weapon S and AP

Assault: "If the initial charger is found to be further than it's charge range from the enemy, the charge fails and no models are moved"

No, acute senses does not grant outflank


Do the rules for wound allocation state if armour saves are all the same for the unit take them all at the same time then allocate actual wounds out as discussed above? i.e. ten wounds on a tactical squad,roll together, 4 failed saves so take off the closest 4 models? Players rolling one die at a time fills me with fear of 'practise rolling'.

there are suggestions for faster rolling including what you have suggested.
the exact mechanics are what I have written above

Pinning is a leadership test (not a morale test) so if you auto-pass morale checks you still need to take pinning (but fearless specifically says protects against pinning) also many of the new psychic powers (and some of the old 'nid powers) are now effective against fearless units as they say take a leadership test, not take a morale test

Beasts:
Mv:12" not slowed by difficult terrain even if charging (don't have difficult=dangerous like cavalry)
Fall back: 3D6"
USR: Fleet, move through cover


skyfire rule means you shoot at ground targets as snap fire (BS 1), unless it also has the interceptor special rule in which case it uses full BS against all targets and can take an out of sequence shooting attack at deep striking units as they arrive (in opponents turn)

Hydra special rules not listed. until FAQ comes out hydra has only rules printed in codex


Here is my question about wound allocation, and I think where a lot of people are being confused. Do you only allocate the wounds on only the one model that is the closest, or the closest models (first row or row facing the shooters). I ask because it has a big difference. Thanks ahead of time. Man, I can't wait to get my book.

closest MODEL, then next closest MODEL.
as we play 40k, ranks are lose and so there may not be a "first row facing shooters"


I have a question about monstrous fliers.

There was a rumour that you could shoot them down,
so they would fall to the ground, take a S9 hit
and now could be charged. :O
Is this true? And if so what does it take to shoot down a flying monstrous creature?

this is true.
only works if traveled at swooping speed (zoom for flying MCs)
for each wound suffered from shooting roll a D6. on a 3+ nothing happens, on a 1 or 2 model grounded, as you said but no armour/cover saves allowed
6/28/2012
Natfka
40k, 6th Edition, Warhammer 40k