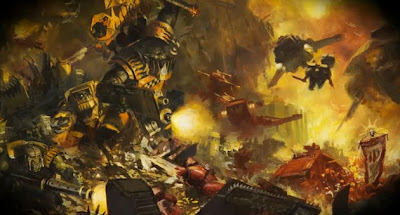 How does fleet work and how does the FOC work with Allies? Some of these questions are answered in a Question and Answer format that appears to be from a friend at GW who has had some time with the 6th edition rulebook.

This was sent in to me by more than one person, so I posted it up from the original post

via General Chips
Courtesy of a friend from Games Workshop who has spent time with the Warhammer 40k 6th Edition rulebook. We (manager of my LGS) sent him a list of questions and these were his answers. Alot of IDK's, but some good stuff in there too.

Did the Force Org chart change?
No, the force org has not changed. It is still 1 HQ and 2 Troops. 3 Fast Attack, 3 Elites, 3 Heavy Support. Although, allies allows you in certain situati...ons to to add an HQ from another army and 1 Troop. You also, once you have satisfied the minimums can take 1 Fast, 1 Elite and 1 Heavy for you allies also. After your list is 2,000 pts, it appears you can double the Force Org chart. So up to four HQ with allies.

Is there pre-measuring for actions? (which ones?)
Pre-measure anytime and anywhere.

Cover Save for: Buildings, Ruins, Area Terrain (trees and whatnot)?
Cover saves seem less forgiving. I would expect less, I know being in woods or trees is now 5+. Also, if you have (Example) 4 guys that are not in terrain. I, being the shooting player, can target just those guys that are not in cover. I have no opportunity to kill the guys in cover although. Interesting.

What is the assault / charge distance?
2D6

Do vehicles have hull points?
Yes

Is 'overwatch' (like Necromunda) in the rules - how does it work?
Snap Shot is the rule. Any unit being charged can make a snap shot at BS 1. They use the full profile of the weapon. You can also use snapshot offensively, that meaning my tactical squad even if I move, I can shoot my Lascannon at BS 1. No template weapons, tanks benefit from this rule.

Is there a defensive fire mechanic (snapfire) for units being assaulted in the rules - how does it work?
See above.

Will you declare and move types (like assault and/or run) in the move phase ala fantasy?
No

how will fleet usr work, especially if run is removed?
Run is not removed. Fleet means you can re-roll you run or re-roll one of the D6 to charge.

Are flyers hit on 6's with shooting weapons and if true are there ways to mitigate that?
Flyers are hit on 6's if they perform a Zoom maneuver.

Details on how allies will work? Will it be on a codex by codex basis (eg CSM codex is rumored to allow IG and Chaos Demons via allies), with very specific unit allowances, more generic FOC based like the old demonhunter and witchhunter rules or fairly open ended anything goes.


There are three categories of allies. Lots of potential, I am not sure of the chart off the top of my head. CSM do get traitor guard, I also believe Demons. Tau have SM and Eldar. Lots of other arrangements. Tyranids get no one....but lots of Monstrous creature special rules added for their pleasure. Stomp, Impact Hits etc.

Psychic defense and abilities for armies without psychers? Rumor that all units get a 6+ save against psychic powers. Another rumor that their might be ways for Tau etc to get psychers.
I believe everyone will have access to some sort of psyker. 6+ is true for everyone.

Whats the effect on embarked units when transport is damaged, wrecked, penned etc. Can they more easily go about their business like 5ed, or entagled like 4ed, or something in between.
Similar, not sure. Much harder to blow up vehicles. Vehicle Damage chart has change as well as Deep Strike Mishap has changed.

Affect of being open topped (good and bad)
Not sure, I believe it is the similar

How will reserves work in the standard missions? Still always an option? Updates to determining when units arrive? Outflanking updated or same?
Normally it seems

Can you assault after deepstrike?
No

Changes to how units fire out of a vehicle (like say if it moves can only one model fire, is their range reduced, do they gain relentless)
None that I noticed

Assault weapons work different now? Can you still shoot and assault or ill they get some sort of ability to fire or affect on the charge?
I believe this is the same.
6/21/2012
Natfka
40k, 6th Edition, Rumors, Warhammer 40k