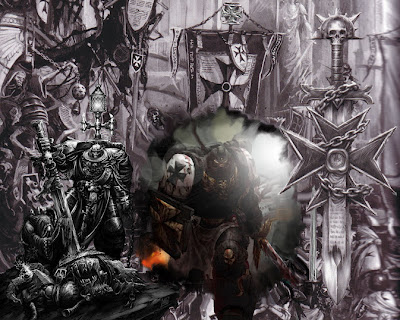 With word of Chaos Marines and Daemons on the horizon, some balance is being restored as we hear talk of something coming for the Black Templar. A new codex, (possibly published in White Dwarf), and some new models between now and September are in the rumors.

via Darnok
A few more birdies have been singing.

One of them seems to be confident that we'll see the new 40K starterbox as a release at or around GD UK.

The other one chirped about Black Templars:
a new codex (possibly published in White Dwarf) and some new models would be coming out between now and August/ September. He confirmed most of the rumours running around about new neophytes, Emperor's champion specific character, new dreadnought model, Helbrecht getting new beefed up rules and a few other things I cannot remember the red mist of excitement was descending. I also recall he said units were going to have their own specific vows and the EC would buff the vows of every on the battlefield.

He said GW were either at best going to drop a new codex and a host of new models in one go, or at worst do a White Dwarf codex release like with Blood Angels and only release a handful of models.