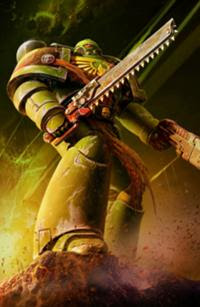 Wound allocation seems to create a lot of confusion, so when I was given the opportunity to get more details from our "source with the rulebook", who was gracious enough to answer questions for us the previous night with a QnA, I jumped at the chance. Here is the what came from that.

Some Answered Questions from the comments sections yesterday
"If the initial charger is found to be further than it's charge range from the enemy, the charge fails and no models are moved"

No, acute senses does not grant outflank


ANY QUESTIONS POSTED BEFORE I POST ABOUT MISSIONS WILL NOT BE ANSWERED!!
DISCLAIMER: everything I write is my interpretation of the rules. I have tried to quote the rules as much as possible but there is a chance that I have misunderstood a rule. Please do not be angry if I turn out to be wrong :D


Pile in:
A pile in move is a 3" move
At the start of each initiative step, for models of that Initiative, if it is not in base to base.
- first any models Pile in if this will bring them into base contact with the enemy

- any remaining models that are not in base contact with one or more enemy models and have yet to Pile In must do so now, and must attempt to get as close as possible to one or more of the enemy units locked in combat.


Buildings and terrain:
Terrain cannot be set on fire by flamers or anything else. However flamers still ignore cover. Certain terrain has special rules like the exploding barrels mentioned in the video. There are about 6 pages detailing different types of terrain and their rules so I will not be writing about them. Don’t ask, wait for the book

Buildings don’t use Hull points and can’t be completely destroyed. When shooting at a building: roll to hit and armou pen as normal. If a glancing hit is scored one model inside suffers a wound with the Ignores Cover special rule (no cover save). If you get a penetrating hit a model suffers a wound as per a glancing hit, furthermore role on the building damage table D6 with modifiers(flamers: if a fire point of the building falls under a flamer the unit suffers D6 hits and the building also suffers a hit. Grenades are also very effective, long rules for them. Grenades are much more useful in 6th)

There are more rules regarding assaulting buildings/fortifications that I won’t go into, but I expect to see more use of buildings in 40K


Moving through terrain:
Different unit types have different rules of course. I am only discussing infantry unless otherwise stated

Roll 2D6 and select highest, this is maximum distance. If a model starts or moves through difficult terrain then they are effected


Models in a unit moving:
It is possible (e.g. heavy weapons squad) to declare at the start of the movement phase that certain models in the unit are not moving and others are. In this case, don’t move the models you said were remaining stationary and they count as stationary for purposes of firing, whereas the models that moved count as moving. Coherency must still be observed.


Wounds
on what I said before. Seeing as there has been a lot of confusion I am spelling it out as simply as I can

Shooting
choose the model closest to the firing unit.

this model then takes a wound and rolls a save

if failed the models wounds are reduced by 1

Close Combat
it works the same in CC. "wounds are allocated and resolved starting with the closest model, just like in the shooting phase"

I think that is as clear as I can make it. If you want to ask questions you can but as I said before the more questions you ask the less likely I am to respond. Otherwise just wait for the book, it’ll be out soon, and if it’s anything like 5th ed even when we all have the rulebook in front of us we’ll still disagree on wound allocation :D.


I will write about missions soon. Any questions posted before I post about missions will not be answered.
6/28/2012
Natfka
40k, 6th Edition, Warhammer 40k