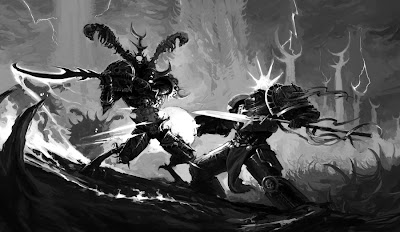 The AP of close combat weapons has been one of the most discussed new rules rumored to be a part of 6th edition. Even though Darnok says to add lots of salt to this one, the shooting at fast vehicles thing I like. Although I can see how quickly all the Grey Marine players (non-painted) would become Blood Angels.

Please remember that these are rumors, and as Darnok says for this set, use Heavy amounts of salt.

via Darnok
These come from a birdy, but I'd advise on heavy NaCl-usage...


AP are on ccw but he says power weapons are ap 2, not 3.
When you charge it's double your move, infantry move 6, bikes 8 cav 7 etc.
It's move assault then shooting now!
Fnp is 5+.
Master crafted ccw give you a 5+ invuln save
When you shoot you roll to hit depending on the speed of your target. Fast vehicles you always need a 6.
A unit can't claim a object while inside a vehicle.
There's new kinds of instance death. If your say strengh 8 vs a space marine captain toughness 4 you only do 2 wounds! Strengh 5 or more would do 3 wounds & kill him.
In kill point missions you get kill points based on what the units points cost, so for example a landraider would be worth 5 kill points & a unit of marines 3pts.