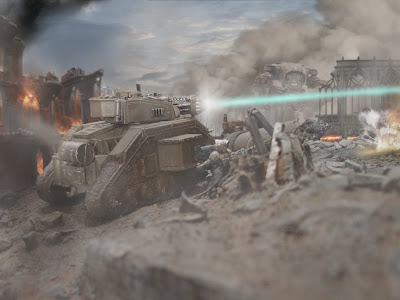 Here we have even more rules and confirmation of rules for 6th edition 40k. Things like more on Allies, Hull Points, and something very cool.... Fortifications.

These are still considered rumors until we get the White Dwarf and Rulebook in our hands. Although in reality these are really starting to clear up. Also note where we first heard some of these things. Some rumor sources are really beginning to be shown as true to their word.


via Larry Vela on BolsHere's the latest from first hand reports of the new book:

Hullpoints: The previous rumors are true. Vehicles move to the new hullpoints system that will eventually kill them after receiving a number of critical chart rolls. Look for 3+ Hullpoints on most vehicles.

Allies are IN: As had been suspected, a new army chart will report the level of cooperation various armies can have. This will not allow cherrypicking of valuable units from another codex, but instead the ability to integrate a second FOC chart into you army from the selected ally. How deep you can develop this second tree (beyond the mandatory HQ and 2 troops) is determined by what level of cooperation the armies have on the chart.

Fortifications: The truth exceeds the mission based rumors. Look to find a new "Fortification Slot" on the FOC that all armies can access and use in standard army construction. Surprise, surprise, the common choices available happen to have existin Games Workshop kits already available.

Close Combat Weapon AP Values: This is true, and look for a full chart listing all the common CC Weapons in the game and where they land from AP1 all the way down to AP-