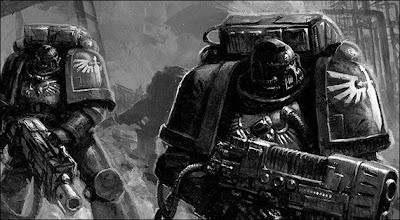 The Starter Set is rumored to be released this coming September, and consist of Dark Angels vs Chaos Space Marines. As more rumors start to float in from just about everywhere, its important to establish a baseline, and this compilation is it. This will be added to the compilation pages above as well.

Please remember that these are rumors, as no official announcements have yet been made.


via 75hastings69
The 6th ed Starter Set will be Dark Angels vs Chaos
The Chaos forces are made up of CSM Chosen, as well as Cultists/Traitors and a funky Chaos Dreadnought.... amongst others
I'm expecting the Starter Set mid September
Starter news I have heard from several places now:

Dreadnought seems likely, as it adds vehicle rules. CSM squad may be referring to the chosen, or may not. Posessed will have to see, but they would add a daemonic aspect to the force.

I have seen the Chaos Dread, and been told that it will not be in the Starter Set. the new plastic chaos dread is gorgeous, and has a tonne of options on the sprue. the 6th Edition starter box will not include a Chaos Dread, but there will be a separate plastic kit.

The starter is due September 1st, staffers have a block for holidays on that weekend and the following weeks.