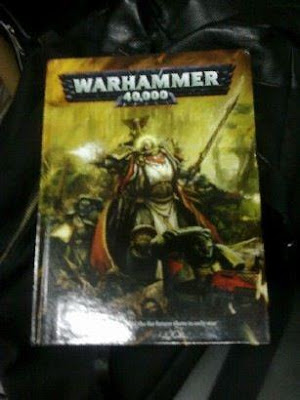 We are in the final week before our first previews of the rules for 6th edition 40k. It has been difficult to get reliable information up, since the rumors are still on a very tight lockdown. Little scraps keep appearing, although many seem to be just copied and re-written from the playtest ruleset we had many months ago. Whether these were real or not though is not the issue, the real news this week has been the cover leak of the 6th edition rulebook. While it is not really confirmed, it is very apparent that this is the rulebook, but doubters still remain.

Father's Day was yesterday, so except for the morning postings, nothing was really accomplished. However, its time to catch up.......

June 23rd
Exactly what is happening on the 23rd of this week is dependent upon which store you are at. Many seem to be having big events planned for the 22nd and or the 23rd. However these are just events to stir up the hype for the biggest release of the year, and that is 6th edition.

What is being unveiled on the 23rd in case you missed it, can be read here
http://www.natfka.blogspot.com/2012/06/answers-white-dwarf-contents-and-pre.html

Basically we will not be seeing the new codex on the 23rd. The release date is June 30th, and you will be able to pre-order the new book on the 23rd along with a special edition of some sort, some dice, templates and/or a tape measure.

So without a new codex, the 23rd will bring us a preview of the new 6th edition rules in the next White Dwarf, which will be released on Saturday. What to expect, is some psychic power rules, flyers, and hopefully some core mechanics on how they will operate. This of course will leave us salavating over what USR's are going to be given to which units, and what the effects of such limited knowledge of the new rules will bring.

Either way, its bound to be exciting this weekend. For those of you like me the 23rd comes late, many hours after the information will already be out. (I am on the west coast of the US). So if you get something....... pls share. : )
natfka@live.com

Also looking over it, those are Dark Angels on the cover. The new poster boys for 6th edition, which already appear on other products and tutorials of late. The fact that there is marines on the cover from a chapter is nothing new, after all RT through 3rd had marines from a specific chapter on it. Crimson Fists to Black Templar made appearances.

Games Workshop has also been going retro of late, looking backwards for inspiration. The last two editions of 40k however only had hammers on it, but with the previous three being specific chapters it makes sense that 6th edition would include Dark Angels on the cover.

With everything I have just mentioned, it is also logical that a cover leak would be the next book out, not a codex that has a long time before release date. Is it a fake? I doubt it, but it is within a small realm of possibility. Is it a special release edition?, also a possibility, but who would know at this point? I am just glad we are getting some information, as it slips through the cracks on the eve of a new edition.


Expectations
This week I expect for us get our first scans of the new White Dwarf. In fact they should start appearing any day now, but I think we will be seeing them around mid week. So look ahead to the next couple days, because we should have something interesting leaking our direction.


Everything On Hold
With 6th edition on the horizon, everything seems to be on hold. Very few games getting in, not much inspiration to work on models, and even though I should be working on terrain, I am not. Maybe with writing this though, that will change today, since I have a few hours this afternoon.
6/18/2012
Natfka
40k, 6th Edition, Presence of Faeit, Rumors, Warhammer 40k