Rules From The Rulebook Are Here: Hull Pts, Focus Fire, Assaults, No Psychic Phase and More 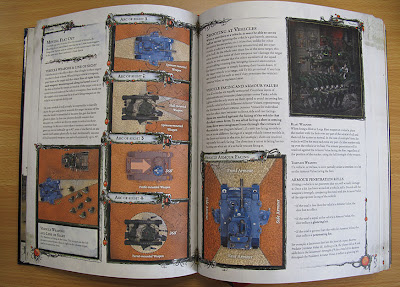 Someone has read the rulebook and man of the rules are here. Finally we have some Answers.... Hull Points are explained in detail with new things, like "focus fire". I am glad to finally read some of these, as they are starting to bring a little order to the rules I have been reading.

One little thing though. Do not take everything here as exact wording and match, as I was able to find one error and I corrected it. That was with flyers, since we now know that its not 12" minimum when zooming, its 18". That is from the video we saw.

I do think this is right along how things are in the new rulebook, and lucky for us, its only a couple days away until we start seeing it in its full context. Also a big thanks to readers here for pointing me towards this set. I beleive it was Trent, but possibly others as well.

Core System
- Change to Pre-Measure like WHFB 8th Edition.
- Force Organization Chart is still in use, no use of Percentage
- Adding new FoC Slot called "Fortification" [0-1] / see below
- Phases remains the same, Movement, Shooting, and then Assault
- No Psychic Phase
- No Initiative Phase

Movement Phase
- Movement is pretty much the same. Infantry can move 6", Jump Infantry 12" and so on.

Shooting Phase
- Rapid Fire weapons can now fire at target 24" away irregardless of moving or not. (or choose to fire twice at target 12" away)
- Pistol is pretty much the same.
- New Weapon type "Salvo" - firing at max. range & max. shots if not move, or 1/2 range and 1/2 shots if moving.
- Heavy Weapon can now be fired on the move, but will be subjected to 'snap fire' rule.
- "Snap Fire" allows certain weapon types to shoot even if moving, but with a BS of 1 (ie. 6 to hit)
- Blast Weapons cannot "snap fire"
- You can only killed as much models in target unit as you can actually see (and within max range).
- Casualties are now removed from closest to furthest.
- Wound Allocation is completely changed.
- When shooting at unit partially in cover, player can choose to "Focus Fire" to kill only models in the open (or in a less covered position).
- You can now throw (most) grenades in the Shooting Phase at the range of 8", limited to 1 grenade per unit per Phase.

Assault Phase
- Charge Distance is now 2D6" adding together.
- Unit can elect to "Overwatch" if being assaulted. Simply a "Stand and Shoot 40K version" - resolved at BS1, Template does D3 hit instead.
- Overwatch can be done only once per turn.
- Unit declaring multiple assaults will suffer from "Disoriented Charge" (not get +1A)
- Unit assaulting multiple enemy unit is subjected to multiple Overwatch.
- Unlike Stand & Shoot, Overwatch does NOT cause Morale Check or Pinning.
- Pile-in reduced to 3" and is done at the model's Initiative Step (ie. before the model could strike)
- Casualties are removed from the front rank, like the case of Shooting Phase
- Units can elect to auto-fail Morale Check at the end of Combat if all models in the unit cannot hurt the attacker at all (ie. S3 vs T10).
- Challenges are in for IC.
- Close-Combat Weapon now have AP value, ranging from AP- to AP1. Pistols don't grant more bonus than in 5th Edition.
- Power SWORD and Lightning Claws are "S: as user" AP3, though Power AXE is S+1, AP2, but is subjected to penalties (Initiative Reduced)
- Fists and Chainfists are Sx2 AP2 and Unwieldy (Intiative reduced to 1), Thunder Hammers has "Concussive" (the exact (or almost) same rules as in 5th Edition)

Vehicles
- Vehicles are now limited to move at the maximum of 12" in the Movement Phase (though it can move further in the Shooting Phase if desired)
- Vehicles can opt to move "Flat Out" in the Shooting Phase, adding an extra 6".
- Vehicles movement and weapons. Defensive and Primary Weapons are gone. You can fire all of your weapons at most of the time. But moving faster will result in less weapon fired at basic BS, the rest will be fired at BS1 (Snap Fire)
- Fast Skimmer moving Flat Out can be more lethal (fire more weapons than in 5th and moving faster [12" Normal + 18" Flat Out])
- Skimmer got a cover save called Jink, basically 5+ cover save and improved to 4+ if going Flat Out.
- Vehicles count as WS0 (auto-hit) if stationary and WS1 (3+ hit) if moved. No idea on how Fast or Skimmer will have bonus, as cover aren't used in Assault.
- Flyers are now in, with its own rules.
- Flyers can move very fast and is hard to target (6 only to hit) unless the shooter has Skystrike rules that allow them to shoot flyer at normal BS.
- When moving fast (called "Zooming") Flyers cannot move less than 18" and cannot disembark any models.

Vehicle and Damage
- New Vehicle Damage Chart, one to rule them all. 1-2 being Shaken, 3 Stunned, 4 and 5 Weapon Destroyed and Immobilised, and 6 Explodes! You only roll the table if the shot penetrate the Armour. Wrecks occur only from taking certain amount of Glancing Hits.
- AP 2 weapons add +1 to the chart, while AP1 adds +2.
- AP"-" is no longer -1 on the table.
- Open-Topped is +1 as well.
- No more "Half Strength if the center hole is off", you always use full strength for any blast that hits the vehicle.
- Hull Points - a new style "wound" for vehicles. Any Glancing Hits removes 1 Hull Point, Penetrate Hit removes 1 Hull Point as well as rolling on the Damage Chart above. If reduced to 0 HP, the vehicle becomes Wreck.
- Vehicles has 3 or 4 HP, notable 4 HP vehicles are Ghost Ark, Land Raider, and Monolith. Details can be found in the rulebook appendix. (Bloodwing stated that some player propose that the formula for Hull Points is Front + Side(once) + Rear divide by 3. Fractions rounding down - this seems to be true.

Vehicle and Passenger
- Passenger can only disembark if vehicle move 0-6".
- Disembarking rules changes, you now place models in base contact with the access point and move up to 6" - this is the furthest distance the unit may move.
- Embarking is pretty much the same.
- Unit count as moving if the vehicle moved 0.1-6", and can only "Snap Fire" if the vehicle move 6.01 - 12"
- Open-topped transport rules are the same (access points and fire points)
- Exploding Flyer that has "zoomed" will result in a S10 no armour save on its passenger. And some sort of S6 Large Blast at any unit under the point the vehicle goes on flame.

Psychic Power
- NO PSYCHIC PHASE (or whatever people are assuming they are)
- Perils of the Warp causes one wound, no saves of any kind allowed.
- Types of psychic power, witchfire (psychic shooting attack), focused witchfire (has a chance to allow player to choose the target model when removing casualty by rolling low scores on Psychic Test), nova (affects all enemy units within range), maelstrom (affecting both friendly and enemy within range), blessing (augmented friend), and malediction (de-buff enemy).
- "Deny the Witch" - every models/units have a slight chance to nullify the effect of psychic power (6+). Chances increase if your unit has Psyker.
- Psychic Hood is reduced to 4+ Deny the Witch if the target of the power is within 6" of the wearer.
- There are 5 new Disciplines of Psychic Powers in the BRB, each has 7 Powers. Each army can access different Disciplines, some cannot use them at all.
- Casting Psychic Power remains the same as in 5th.
- Psychic Powers now have 2 level, calling Warp Charge 1 and 2. Mastery Level 1 can only use Warp Charge 1 power, while Mastery Level 2 allows you to cast 2 "Warp Charge 1" power or 1 "Warp Charge 2". Higher Mastery allows for more.
- Each Psyker generate Warp Charge equal to his Mastery Level.

Characters
- Look Out, Sir! is in. Grants character 50% chance to evade the attack if he's within 6" of friendly unit (works in combat too), resolved each successful Look Out Sir on the models within 6" instead.
- Look Out Sir! is improved to 2+ for Independent Character.
- Character can issue / accept challenges.
- One model in your army will be the Warlord (one with highest LD), Warlord can roll on a table (there's 3 table, you can choose 1) to see what benefit he receive. Examples are units within 12" can use his LD, the Character count as Scoring Units, Warlord has FNP if within 3" of Objective.

Tidbits
- Fortification - a new addition to the FoC, limited to 0-1 this allows player to purchase some kind of terrain for their army. Expensive one are Fortress of Redemption (220 points) and cheap ones are Aegis Defence Lines (50 points)
- Allies - a new system that allows player to have a detachment made of another army in the list. Allies works like WFB8th Edition with best buddies, normal allies, and untrusted. The detachment is limited to 1HQ and 1 Troop(compulsory) and additional 1 Troop, 1 Elite, 1 Fast Attack, and 1 Heavy Support.

Missions
- There are 3 Deployment Types, one being the classic Pitched Battle, second one is reversed Pitched Battle (deploying along the short table edges), and third one is a triangular deployment.
- Selecting deployment zone remains the same, roll-off to see who deploys first and go first.
- Seize Initiative is still the same.
- 6 Missions with 2 Level Objectives. Primary Objectives grants more Victory Points, but harder to achieve. Secondary Objective is always 1 VP and has 3 of them. First Blood (for getting the first "kill point", Slay the Warlord (for killing the enemy Warlord - aka. general), and Linebreaker (having your units in enemy deployment zone at the end of the game)
- Deep Strike Mishap is softened now: 1 - You're Dead, 2-3 Misplaced, and 4-6 Delayed.
- Feel No Pain dropped to 5+
- There's still only 1 Level of Instant Death, no Instant Death(x)
- Fleet allows for re-rolls on Run and possibly Assault distances.
- "Hammer of Wrath" allows model to make single attack at their base strength before combat on the turn it assault. Jump Infantry and Bike have it.
- Monstrous Creature can make "Smash" attack, forfeit half of its attack to resolve attack at Sx2 against vehicle.
- Flying Monstrous Creature can make two mode of movement. One being 24" move, performing D3+1 "Vector Strike" on a single unit within the path and then shoot up to two weapons or run 2D6" in the shooting phase. However, it cannot assault or being assaulted unless it get shot and fall down from the sky first (can't remember how you fire at it, 6 only?) Should it fall from the sky, it will take S9 hit and can now be assaulted as normal.
- Sniper has rule to allow them to allocate wounds to the model of your choice if you roll a 6 when rolling to hit.
- Rage is now +2 Attack on assault.
- Many new generalization of rules...such as Armourbane (roll 2d6 for armour penetration) and Fleshbane (2+ to wound)....this also expands to weapons as well (unwieldy, concussive, etc.)
6/24/2012
Natfka
40k, 6th Edition, Warhammer 40k