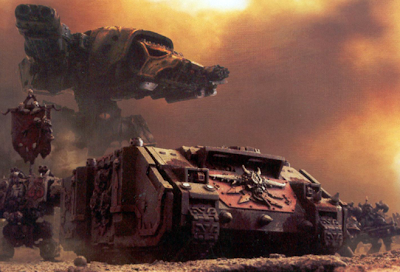 Some of the latest talk regarding 6th edition rules is here. Of course there is mention of an August Daemon wave as well. So take a look.

Out of these, I was caught off guard a little by the vehicle weapon skills. It took me a few moments as to why they have one.

Please remember that these are rumors, and rumors always need to be taken with a little salt.

via Whitehat
Plastic Plaguebearers & Nurglings, Finecast Blue Scribes in August (amongst what Im presuming is that metal daemons will be released with Finecast Versions.)

6th ed - a few morsels
Random Charges are 2D6 pick the highest (unless going through Difficult Terrain where its 3D6 and you drop the highest.) Move through cover I believe adds an extra D6

Vehicles are WS0 if stationary, and WS1 if they move, no matter how far they go.

Vehicles go the same distance in the movement phase (I believe 6" and fire everything regardless if fast or not) but in the shooting phase can make an extra move (apparently some kept forgetting what vehicles moved to fast to fire...

Vehicles cannot contest (unsure if scoring units in transports can

6 Missions and 3 deployment types (2 of the deployments are the same as current, Spearhead & Pitched Battle.)

5+ Cover save for most things including ruins.

Allies rules are in, but its meant to be for team games (ie separate force org chart, distrusted ally rules similar to Fantasy)

Percentages are *not* in

Wound Allocation is closest to furthest.

Dueling is similar to challenges in fantasy but contrary to earlier rumors, they don't replace Combat res, just add to sides. A IC can challenge another IC in the same combat even if not in base to base. If the defending IC refuses, he simply cannot attack that turn, if he does he counts as being in b2b and no one else can hurt him apart from the attacking IC. I'm guessing this is to offset the Wound Allocation rules

Rapid Fire weapons may now can shoot at long range while moving. restriction on assaulting after rapid firing remains.