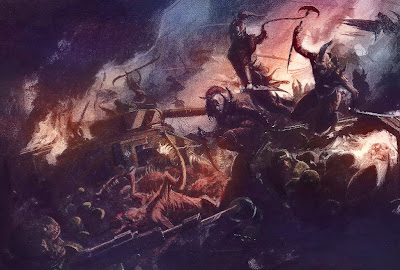 Here are a few more rules that are coming down from high above. Night Fighting possible in every game? Looks that way with nightfighting occuring on a 4+ round 1. (and you guys were worried that shooting armies would dominate).

The warlord charts are here, and right now I do not remember if you get to choose or you roll. It looks like you might choose a category, and then roll, but I do not recall hearing a definitive answer on this one.

via DJ3 and Rixitotal
Beasts ignore cover completely for assault purposes. Beastmasters finally get to hit at I5-6

Night Fight changed completely:
Every mission has Night Fight by default, but only on a 4+, including Turn 1. If it triggers, keep rolling each turn til it fails.
cant shoot over 36. over 24 away have shrouded (+2 cover save), over 12 away have stealth.
Night Vision now completely ignores Night Fight, as well.
It's important to note that doesn't include Acute Senses (which is now just a re-roll for Outflank), so we're mostly talking about Dark Eldar.

As a Dark Eldar Player, I have these questions: How many hull points on: - Venom - Raider - Ravager - Razorwing/voidraven
Has poison changed for shooting?
How far can a flat out fast skimmer go? (basically an outline of how tanks move + how it affects their shooting)
Can I move the raider 12" snap fire out with my passengers as im open topped and then flat out?
all 3 except venom, thats 2 like vipers.

poison is the same.

fast is 6 fire all, 12 fire 2 at bs and the rest as snapshot. then can go 18 as a flatout if ure a fast skimmer.
cant fire out if u go flatout, neither can troops inside.
So passengers can fire 2 at BS and snapshot the rest if their open-topped transport moves 12"?
Is 18 the farthest you can go, or can fast skimmers still do 24"?
no, turbo boosting and flatout is done in the shooting phase instead of shooting, u still move first. so fast skimmers can go 30 in 1 turn, eldar jet bikes can go 48!!! and no that shooting is for the vehicle.


You can move 6" after disembarking from a vehicle, even if the vehicle has moved at Combat Speed.
This undoes the vast majority of the problems we encountered after learning you can no longer disembark from Cruising Speed vehicles, and means Trukk/Raider armies aren't crippled as we feared.
The 2" disembark radius is gone, however, so those things are still slightly worse. You basically move 6" from the hull of the vehicle (or access point, where relevant).
I should have stated it better, but I was assuming context of previous rumors--we heard earlier that you cannot disembark when going Cruising Speed, so obviously you cannot disembark when going faster. I'll edit to clarify for anyone that hadn't heard that.

Strategic:
1. all your units get move though cover for ruins and stealth in ruins.
2. you amy have night fighting on the first turn.
3. your outflanking units get acute senses.
4. while he is alive you may reroll reserve rolls.
5. while he is alive your opponent get -1 on reserve rolls.
6. after both sides have deployed but before scouts you may redeploy 1 unit 3D6 inches, or 3 units D6 inches, may not leave deployment zone.
6/25/2012
Natfka
40k, 6th Edition, Warhammer 40k