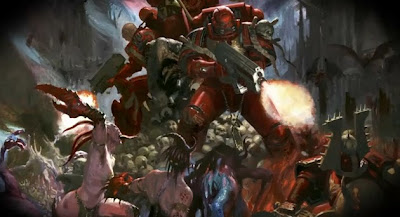 Of course I have a little bit more information on the rules coming out of the White Dwarf. While some of this has been gleaned before, its all about any new tidbits of information.


These are taken from those lucky enough to have the White Dwarf a little bit early, and generous enough to send them in to Faeit 212. .

Shooting at Flyers from ground at BS1, overridden by Skyfire rule
(letting you use normal BS). Only when Flyers is Zooming. Hover mode
is like Fast Skimmer.

Launching multiple assault takes off +1 A for charging.

Most vehicles have 3 HP, Dreadnought for sure.

Snap Shots may be fired when Veh is Stunned.

Flyers may Evade for 5+ cover.

4+ for Look Out, Sir to redistribute wound, 3+ for ICs

Storm Talon is 2 HP, as possibly other Flyers.

There is talk about those Psychic powers, reeading between lines is:
well, future Codexes will have them redistributed better, though for
now it would be fail not to use them. then there is that table flying around on
internets. Each Codex which has something to use has its own paragraph
explaining how to use them, mechanics vary between armies.

Forgot to add, something interesting is written (citing):
"My final choice for Primary Detachment [...]". Sounds like there are
more Detachment types than we thought at first. :)
6/22/2012
Natfka
40k, 6th Edition, Warhammer 40k, White Dwarf