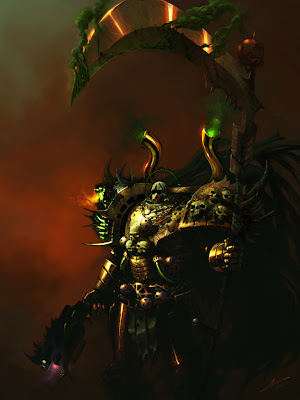 Very soon I expect Chaos rumors to be surfacing at a greater rate. To make sense of it all it was time to do a compilation of rumors floating around so that we have a baseline to work off of. For the most part we expect this codex to be the first codex of 6th edition. Lets take a look at what is being said.

Please remember that these are rumors, and are to be given a grain of salt. I have on purpose not included theDarkGenerals rumors. Perhaps I will do a separate post at a later date for his rumors.

via atraphos
Further rumors - in around 2 months time we should see 6th and the following month the CSM Dex, building on the CSM released in the 6th starter.
A double month of CSM coming up soon.
My source supports the CSM HQ being the stat or force chart changer theory that has been rolling around


via Tastytaste
Sept-Oct Chaos Space Marines
The Chaos Space Marine codex is the only 40k codex for this year. It is not going to be divided into two codexes or anything special. This is not the return 3.5 codex everyone has been wanting this is more a clean up than anything else.
Troops choices will be Chaos Space Marines and Cultists
All Cult Marines are Elites
No new Special Characters
Special Characters will unlock Cult Marines as troops (Kharn for Berserkers and so on)
Typhus makes Cultists into Zombies
Chaos Dreadnaught is removed and replaced with a new unit (like how pariahs were replaced with Lychguard)
CSM now get a Flyer a Mechanical Chaos Dragon (model is done will be part of initial release)
Lesser and Greater Demons are gone
Spawn replaced by “Fell Beast”
Rules for Traitor Guard are in!
Oblit options will be even more expansive with close combat load out available.


via Bigred on BOLS
Codex author is Phil Kelly
Chaos Cultists are available in blob squads into the thirties...
Certain Named Characters grant various USRs and other special rules to Cultists when selected.
-The "flying dragon thingy" is coming. It is a flyer and one of two entirely new units added to the codex.
-The second new unit is said to be a Chaos answer to the Grey Knight Dreadknight.
-The Chaos Dreadnought is indeed still there (take a breath people), but gets a new name, and a rules overhaul.
-Hardcover book (just like Fantasy army books)


via Grant
Imagine a dragon made of "fire" and coverd in a platemale armor and you won't be too far off. That is the best discription I can give.
Some of the concept art shows it mauling a valkyrie mid flight. It is pretty cool.
Chaos units that kill a unit get to roll on a chart for gifts from a chaos lord very similar to the power from pain rule that Phil gave to DE.
Thousand sons are still relentless and still have ap 3 bolters.
The codex is a full color hard cover book.
There are no legion rules
you can do is unlock certain elites as troops with specific special characters.
Ahriman is a psyker mastery level 4 now.


via MrSteelfist
Only a little rumour i picked up at Warhammer World but i've heard mention that there will be a Techmarine type character, not sure if this is a SC or just a HQ choice though.

I just recalled being told that there would be a smaller demon engine that operated in a "pack" but isn't Brazen Knights. This may bestudio people just throwing some falsehoods out there to mess with us but thought it worth mentioning.


via BramGaunt
heard Special characters such as Kharn, Ahriman etc unlock unlimited Cult units as Troop choices, but generic HQ choices with a mark allow one appropriate Cult unit as Troops (similar to Ork Warbosses and Nobz). He also said he'd heard Chaos players will need to nominate one HQ selection as the army general, and that one will determine which Cult units become troops. No taking Kharn and Ahriman and getting bothe Berserkers and Rubriks as Troops


via Stickmonkey
plastic Chaos drop pod could be in the works, but tempered that by saying we probably wouldn't see it any time soon. Whether the kit is released soon or not, there could be a chance of the rules appearing in the Codex though


via Darnok from February 2012
painted versions of all four Cult Terminators have been sighted, but they could have been conversions. These could have been made with the sprues other rumours have mentioned.