The Galaxy Trembles as Chaos Approaches 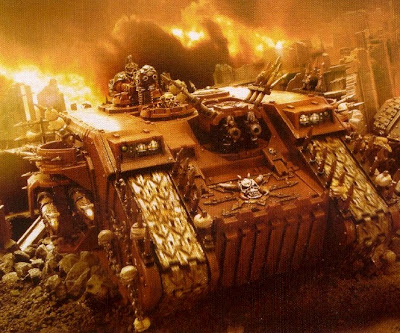 A few small fleeting rumors are running around discussing the upcoming Chaos Marine codex. The first of which, claims that Chaos Marines will be released the month after 6th edition hits the stands. There is also mention of a new land raider again, but with a troop capacity of 15-16 models.

Please remember that these are rumors and to please take them with a grain of salt.

via atraphos
Further rumors - in around 2 months time we should see 6th and the following month the CSM Dex, building on the CSM released in the 6th starter.
A double month of CSM coming up soon.

My source supports the CSM HQ being the stat or force chart changer theory that has been rolling around, but as he hasn't seen the rules I guess he is simply speculating on reverb.

Unlike when he received the Nid codex a month and a half early, nothing of that sort is out yet for 6th or CSM. If the books and dexs have been printed already, they are still under wraps and heavily guarded, probably with overwatch in full effect.

via theDarkGeneral
According to my contacts, we're about 2 months away from a Chaos Invasion, so let the galaxy tremble!!!
New Land Raider: Transport Capacity 15 or 16 models. Name is still not known
6/05/2012
Natfka
40k, Chaos Space Marines, Rumors, Warhammer 40k