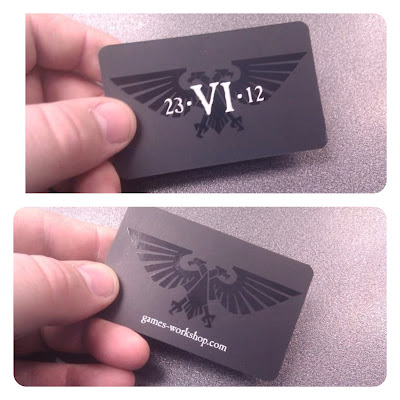 A while back we were looking a 6th edition release date of July 7th, and that seemed to be very consistent through the world of rumors. Then suddenly we had Games Workshop release a video with nothing more than a big date on it. It was pretty obvious that the date was for the release of 6th edition, but what was the date for?

It was assumed, and seemingly correct that this would be the big announcement date, along with being the first day of pre-orders, then we would have a June 30th release date. However there are some that contend that the 23rd is the actual release date for 6th. The picture above is quite convincing, What you do you think?

via Ieuan from Sons of Isis
23 VI 12 is release date! Well it's got to be right, you wouldn't get one of these (shown on my local stores Facebook page, GW Oxford) just for a pre order date!

via Commissar Merces
"Prerelease party on the 23rd, come in and get your WD and have a tournament with an announcement later that day"
"The real party is going to be on the 30th, the 23rd is just the warm up. But come on in for fun events and there will be a bit announcement that night."
"We don't know of any sponsored event on the 23rd, only on the 30th."

via REDEATH
I heard that digital (iPad) edition of 6th won't be available till September to be released with the starter set. (I guess so they get everyone that buys the hardback in June that owns an iPad will go and buy the digital version too) I also heard that the 6th and all the forthcomming codexes will have a code to purchase a discounted digital version....so if you buy the lets say hard back Chaos Marine Codex for $42 then you can get the digital version at $22


There are quite a few out there that still say the release date is June 30th. I suppose we will know for sure in a couple days.

via BramGaunt
It's the 30th.