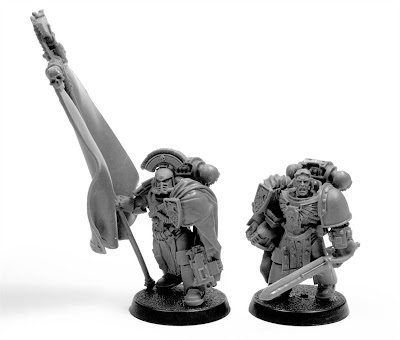 This week Forgeworld is making available the MkIV Space Marine Command Set and etched brass symbols for the Minotaurs Space Marine Chapter. The command set is extremly nice, and you can get a closer look at it here.
http://www.forgeworld.co.uk/New_Stuff


via Forgeworld
MkIV Space Marine Command Set
Each Company in a Space Marine Chapter falls under the command of a Captain, a hardened veteran and a master strategist. These lords of war read the battlefield’s ebb and flow with enhanced reflexes and a post-human grasp of the ever-changing arena of combat in which they spend their lives.

In addition to his Chapter rank, each Captain may also bear additional honorific titles and epithets associated with both his deeds of valour and the Company he leads. Each is often accompanied by a Standard Bearer, carrying the battle-flag of the company, invariably steeped in history and heavy with the glories of the Chapter.

This detailed set of miniatures is available to pre-order, for despatch from Friday 29th June. 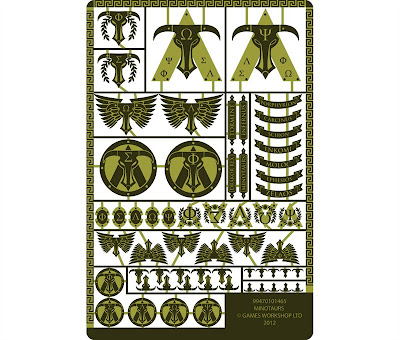 Etched Brass Minotaurs Symbols
The Minotaurs are a Space Marine Chapter of dark renown, infamous for their cold and brutal methods of war, their mastery of siege craft and their malign and bitter paranoia even when fighting alongside allies.

This sheet of Etched Brass Minotaurs Symbols, designed by Kenton Mills, contains 60 individual Chapter icons, blazons and symbols suitable for use on Space Marine infantry and vehicles from shoulder pads, greaves and chest plates to doors and other vehicle panels.