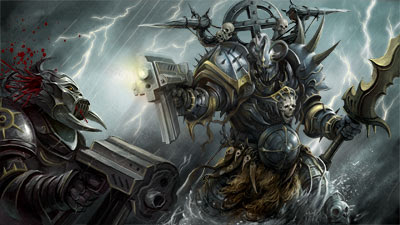 This morning we have a nice rumor set that works to clarify how hull points are used (changing what we thought we knew). It also delves into the "to wound" charts, discusses pentrating hits and more. Some of this sounds decent and goes along with what we have heard before, and some of it alters or changes our current rumor sets.

These are rumors, so please take them with a grain of salt.

Hull points don’t work as rumoured: they are only for front armour 14 vehicles and work like a structure point or a “wound” which can be used to negate any result, even wrecked or explodes. not sure if this is a once per game thing, i suspect so. but no more one shotting land raiders and monoliths with meltaguns

and pens give +1 to all subsequent damage rolls in that shooting phase, so essentially after a pen all weapons shooting a vehicle become AP1

rapid fire: double tap up to 24” if stationary. 1 shot at 24 or 2 shots at 12 if moving. Relentless gives and extra shot at each range if stationary as well as the standard bonus.

Stunned results stack to weapon destroyed, extra armour negates 1 stun per turn, not sure on shaken

Strength vs toughness chart changed to be like fantasy, so everything can be wounded on a 6.

though, vehicles going flat out can only be hit on a max of 4+ with shooting, fliers hit on 6+

Preferred enemy gives re-rolls to hit with shooting and in combat, but not the re-rolling of 1s to wound
6/16/2012
Natfka
40k, 6th Edition, Rumors, Warhammer 40k