Allies in 6th Edition: Allies Chart from Rulebook and Perspective

There is one topic that is hitting people all over across the specturm of our hobby, and that is allies. I figured I would post up everything I really know about them here and some nice charts, because the levels of allies makes a big difference.

BTW, the pic above is the full 6th edition rulebook cover front to back.

Allies are taken as a seperate detachment from your regular force, meaning that you must take 1 HQ and 2 Troop from your regular chosen codex before you take a detachment of anything. Once that is done, you can take 1 HQ and 1 Troop choice of an allied detachment, and once complete it opens up an additional 1 Elite, 1 troop, 1 Fast Attack, and 1 Heavy  from the allied army codex. Note that as far as we know you cannot take special characters with an allied detachment.

There are some obvious restrictions.... These come in the form of three levels of allies. Lets look at it

via the Video release from GW... Glimpses of the Rulebook Allies Page
Units in your army treat allies of Convenience as enemy units that cannot be charged, shot, targetted with psychic powers or have templates or blast markers placed on them. However, if a psychic power, scatering blast weapon or ability that effects an area hits soem of these allies of convience they will be affected along with any friendly or enemy units.

Now that is directly from the video were we get to see the page of the rulebook. I am sure there are more rules we cannot see there.

This is what the rumors say
Battle Brothers: Good can join each others units with IC's and cast psychic powers as if they were friendly.

Desperate Allies: Have to roll if within 6" of an allied unit. if they roll a 1, they cannot do anything.

While the selection of allies appears to be huge at first glance, the chart I will be bringing up will shot it to be only viable with certain armies. Lets look at who is probably getting what..This chart is out of the rulebook. 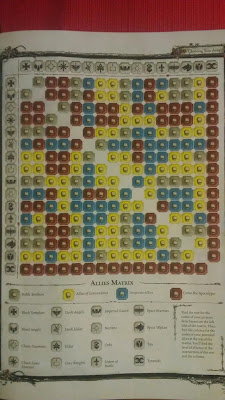 This is a good representation of who will be on par with who. Grey Knights for instance have no Battle Brothers then. Dark Eldar get only Eldar, the rest is all desperate allies. Even Imperial Guard do not get as many as I would like to see, there is just a ton of blue and yellow on the chart.

We are looking at some serious tactical restrictions out there. Also remember that these additional detachments take up points. Quite a few in fact. List after list, I have found that at 2000pts and above... were we mostly are playing at, I am less inclined to take allies. What makes a bigger difference in the game than allies is opening up and doubling the FOC at these point levels. So Tyranids doubling up their FOC really makes some excellent choices.


So should these rules, which are not part of the core game be excluded from the tournament? Lets dive into that for a second. Lets start by saying that the new rules are designed around that as being part of it, by removing certain aspects of the game you are changing it drastically. It can be done, and I am sure some TO's will do it. The game in its core parts are written with some balance in mind, (you can argue that to the grave, but if we dont assume it is then tournaments are pointless anyways). Taking out sections like fortifications will allow flyers to dominate the game. There just is not enough anti-air in it. The first tournament to start screwing with the game and not allowing allies and fortifications, is going to see me bringing broken lists of flyers into it. Yes, I already have lists that will easily take advantage of these rules being altered. The game will break down. People will take ahold of any advantage they can, and when you start re-writing the game, (removing parts), you are asking for broken lists... far more than you will get otherwise.

Lets get into the positive, since I have been list making now for a bit.... Double FOC and Allies are in the same boat as they allow a greater flexibility in army types we will see on the tabletop. Its not all about the cinematic, although allies makes more sense this way, than it does limiting everyeone to one codex. The armies we will start seeing will contain an amazing diversity with these new rules. Already I have seen what my guard lists will like, and those lists are much different than they were only a few weeks ago. The amount of flexibility is amazing and fun and breathe some new life into the game.

Balance. I have said it before, that I truly beleive that allies and double FOC are the way to go. You did not see it much in 5th edition becuase the point level was above 2500pts before you could double your FOC. Now with it lowered into playable games, you will get so much more life out of your armies, tactical holes in it will be able to be possibly filled. There will always be some weakness to your list, after all you only have as many points as you did before.

Doubling your FOC far outwieghs allied advantages, but allies are still nice. A more varied game out of codices and the rulebook is what we are dying for, but I know change is hard. I think of us in 5th edition as living within a tightly confined box, and with 6th edition, we can finally break those boundries, tear open the box, and expand our game.

So my suggestion, give it a chance. Take a deep breath, open your mind to the possibilities and embrace them. This is going to be a truly great game.