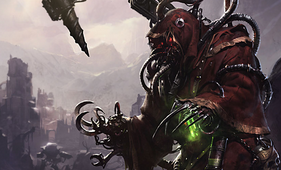 From this week's White Dwarf there are several formations that are revealed. One focus's on the new Sicarian units, while the other on the Ironstriders. The Skitarii are going to be a huge force multiplier as the rules for these formations and the detachments start to sink in.

Noteworthy stuff:
Codex Skitarii is only $33.

The Sicarian Killclade formation is 3 units of Sicarian Ruststalkers and a unit of Sicarian Infiltrators.
The formation has a 12" range on the "Neurostatic Aura" which reduces WS, BS, I, and Ld.
The formation can also run AND assault once per game on any turn after the first.

Another formation is the Ironstrider Cavaliers (IC) which is two units of Sydonian Dragoons and a unit of Ironstrider Balistarii
The formation has Acute Sense and Outflank
It also nominates a character at the start of the first game turn and the formation re-rolls failed To Wound against that character's unit.
The models in the formation are always treated as having line of sight and ignores the cover saves of intervening models.
Single reserve roll to come in, the formation MUST begin in reserves, rolls begin on the first turn, and all models come in together.

Doctrina Imperatives is actually six different imperatives, which will as other have said likely function like the Astra Militarum orders.

Those who aren't the biggest fan of painting red will rejoice as there are five different color schemes shown in the Codex and not all of them are red.