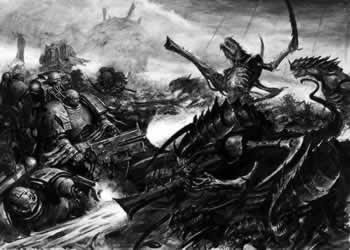 Yesterday we had a rumor set on Tyranids, and while they are a ways off, it was interesting to at least get some rumors for 40k's notorious bug army.


Now one of the more interesting things that came about after having a tyranid rumor set, is that sometimes we get comments that are worth drawing readers attention to. Sometimes the comments come from playtesters, sometimes from other unknown readers or Games Workshop employees.

This comment says it very much guarantees a White Dwarf update this year. Lets hope and pray this is true, and alongside the phrase that GW is trying to give love to at least a dozen armies per year now.

While this comment cannot ever really be confirmed that it is someone from GW, it had the feel of someone that does work there and is in the know. So Please take this bit with a doese of salt, and to those of you that were guessing it was Matt Ward joining the conversation, I highly doubt it, but wouldn't that be fun?


via Faeit 212 comment section by an anonymous poster
I can absolutely, positively guarantee you there will be models for them in 2013; as well as a WD update for said models.

GW is trying to give love to at least a dozen armies per year (both systems included) from now on. Gone are the days of "2 armies per system, and those are the only ones who get anything."

There's a reason I choose to remain Anon on here. Just saying...