QnA from the Warriors of Chaos Army Book 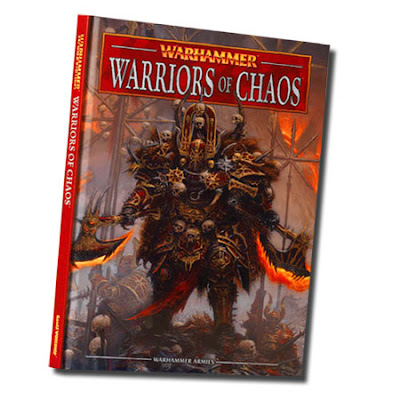 Someone now has the army book Warriors of Chaos for warhammer fantasy and was nice enough to do the community a favor by answering some questions. So here is a compilation of those questions and answers gathered and collated by the Johan Mars over at Dice and Brush.

collated by Johan Märs over at Dice and Brush

via Beluc over at Warseer:
So I'll start with the thing everyone is waiting to here.

50 Great weapon, Khorne Marauders with full command are 580 points, they do however retain their statline

Now on the more mundane things that have changed.

Marks on a per model basis

Mutant regen is gone (except throgg), and troll vomit is no longer magical, same cost

Forsaken are basically the same, same point cost, with a chart of rollable USR, ranging from asf, poison, etc
MofK on Forsaken is hatred, MofS is Swiftstride

Eye of the gods are all stat increases, except for 12 which turns characters, and chosen champ into Daemon Prince, units gain stubburn

Sigvald always rolls +1 A on eotgs, and gained T5

Hellcannon gains 5+ ward, everything else is the same

Chaos lord statline, ws9, S6, 5+ ward, Magical attacks, Unbreakable , must take a mark Khorne is +1s on charge, Nurgle is -1 to hit, Slaanesh is armour piercing?, and Tzeentch is re-roll 1's on ward and channel attempts

Slaughterbrute is basically just a attack machine, bound uses are lord or hero ws, and opperates as normal (S7 or 6 can't rememeber exactly can check later, t6, 4+ armour) or can be unbound in which case its frenzied (which it can't lose), and Random movement 2d6, can buy 2 more s5 attacks

On Magic really great spells basically all made to turn the army into a killing machine, some of my favorites are 2 slaanesh spells 2 and 6 are hexes that give the unit ASL, and random movement d6, Treason is no inspiring presences or hold your ground, Phantasmagoria and Pavane, are both there. Nurgle has a lot of spells that are hexes and augments depending on who you use them on. Curse of the leper gives +d3 T to allies or -d3 to enemies. None are AoE if I recall correctly. Gateway on a 10+ for S is 3d6 hits, instead of 2d6

Skullcrushers get regular MC stats, Juggers have 3 attacks at s6 on the charge, Riders buy lances for 3 or EW for 5. Juggers have magical attacks and are only +2 to armour. Added (And 20 pts increase?)

Daemonswords is gone, Magic items are if I recall correctly, Hellfire sword, Sword of change, The nurgle mace, helm of many eyes is now armour, a slaanesh item that gives you an additional attack for every wound you cause (might be a gift actually), The chalice is pretty meh to be honest.

Gifts are mostly pretty cheap, there is one where you trade your attacks for double strength, flaming +5 ward against flaming, poison + 5 ward against poison, scally skin, third eye is back but it doesn't steal spells, an item that gives you +1 spell and +1 to channel.

Oh glean magic, lore of tzeentch, your oppenent loses a wizard level, and a randomly determined spell, which you then gain.

Banner of rage is mofK only makes frenzy unlose able, if a character with the banner joins a unit they gain frenzy,I'm pretty sure blasted standard is also there can't recall all what it did to be honest.

There is a slaanesh banner or item that lets the unit roll 1d6 for Ld.

Oh giant is much cheaper, and mark of Slaanesh is +1 I

Question: Can you expand on the eotg table some more please since its involved so much is it similar to csm one or is it same small table with few changes? Do marauders come with light armour as standard or do you buy it?
Its pretty much what I said so far, 2 is take a ld test if you pass your -1 Ld and stupid, fail and your a spawn or removed, Stubburn, as is LD, 12 is daemon prince, 7 is a re-roll for that turn, everything else is a permanent killing stat increase.

Answer: Marauders are same as now you pay for all their gear in addition, you start with a naked dude.

Question: You're kidding. you have to CAST the EotG spell as a bound spell? That's it?

Shame on GW for pulling a brazen bait and switch with skull crushers, making them awesome so everyone bought them, then nerfing them once sales declined. And the warshrine too... a bound spell?

Answer: A unit of 3 skullcrushers w/ lances at under 250 points puts out 9 S 6 attacks, 9 S6 magical attacks and 3 S 5 magical attacks, have a 1+ armour save, and highly resistant to test or die spells, I'd say they are well costed, especially when compared against chaos knights.

Chaos knights stay the same, Command are normalized, and marks are per model, must buy EWs.

Question: They don't seem worse. The mounts gained +1 attack and +1 strength on the charge. They might be more expensive, but they're even deadlier than before.

Answer: Not red fury, they get an additional attack afterwards, think that pendant in the hordes of chaos book.

Question: What options in the book allow you to field a viable mono-Khorne army with no wizards as you should be able to do?

Answer: Depends what you mean by viable? Do you want an item that basically makes the opponents 200+ point investment pointless? Or are special flying monsters with regen and 6 attacks not an option? Not to be snarky or rude, I've never understood non-khorne players asking for nifty items or abilities to deal with magic. Khorne hates magic, take the wizard's skull. The fact that you can comfortably fit 3 flying monsters into a 2200 points list should deal with wizards pretty quickly.


Question: Must've misread something, I thought you said they're now AS2+ instead of AS 1+
Answers: Nope the Jugger gives +2 instead of +3 so the total is still 1+, as they have shields.

Question: are there any god specific gifts?
Answer: Several gifts and items

Question: You mentioned marauders are now more than double their original cost. What about warriors, you said their stats are the same... exactly the same? Did their points cost go up or down?

Question: Is Kholek still in the book? If the answer is no, just don't reply. My heart will break

Answer: lol Kholek is there cheaper and largely unchanged, although someone did mention his armour save was lower, I didn't follow up on it so I can check if I remember.

So I've double check warshrine. It gives a 3d6 roll and you remove the die you want. For example if you roll 2-3-5 you can have 7, 5, or 8 result. Which means unless you roll triple ones you aren't going to see insanity which still functions the same.

Question: Still after an answer on puppet if it's definately out?
Answer: Gone, like my dad

Question: Jeez and forksaken are the same points. ???
Nerd Vomit.
Answer: Forsaken are pretty meh to be honest, ASL is 1 in 6 chance, followed by one of poison, asf, killing blow, armour piercing, and one more USR.