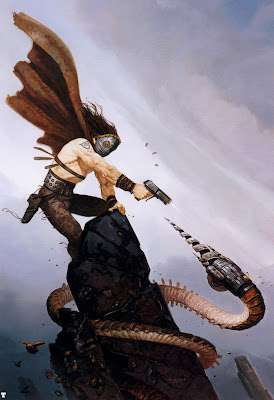 I thought it was time to go over some of the basics on the rules, and feature some of its gamesplay that makes the game outstanding.


First off, if you have missed the previous posts on the Dark Age tabletop game, here are the links to get up to speed.

Dark Age is a skirmish game that uses a d20 with the lowest rolls being successful and the highest failing. So yes, all you "I only roll ones" can now get frustrated when you only roll 20's. lol.

Games play generally starts off on a terrain heavy 4x4 board but can be sparse, as  of many of the fights are fought from barren wastelands to ruins of ancient cities. In fact when it comes to terrain and environmental effects, Dark Age really shines. There are easy charts to roll off on that will give your battlefields the love that will keep the battles extremely fresh and exciting.

Scenarios. The standard game is simply a two force meet up where both forces clash and the winner is the one with the most points left alive. However, the games advances from the basic game and adds 20 different scenarios for you, (once you have the rules down) that you can roll off on to get.

Note that in Dark Age, your forces run into other warbands, that very much might be there for a different reason than you are. The missions reflect this, and each player rolls up their scenario objectives separately and reveals them to their opponents before the battle starts. This means that you could be here trying to recover an artifact, while your opponent might be here to steal supplies, scavenging, might be on patrol, or looking for a trophy target to kill.

Beyond missions, a game round starts off with initiative being rolled. The lowest chooses whether to go first or make the opponent do so, by choosing a unit he must activate. From there, the player who's turn it is, activates a unit/ model until that unit completes its actions. when done, the opponent chooses a model/unit and completes its actions. This trades off back and forth until both players have no more units left to activate. Then the round is complete.

Actions are handled by action points. Each unit has a limited number of AP's (action points), normally 3 or 4. For an action, you may move, charge, swing in close assault, do a ranged attack, activate an ability, in any combination. You may even charge (which may kill the model you charged), then charge another model in range, and then do it again until you are out of action points.

While some actions can only be done once, like an attack may only have a rate of fire of 1 (which means can only be used once per activation) others can be done as many times as you have APs. You can even hold an action, sacrificing 2 APs in order to get one hold action. These holds are for such things as bracing for a charge, or holding a ranged attack while the enemy advances.

Combat is done simply by grabbing an attack value for the attack you are performing, comparing that to the defense value of the target to give you a target number on a d20 that you need to roll equal to or less. Once you hit, an armour save is rolled by the target of the attack. You simply grab the Armor value and subtract the power of the attack against it. Once again rolling less than the target number required. Once you hit and a save is failed, you do 1 healthpoint of damage.

Many weapons have special abilities and some even do more than 1 healthpoint of damage. Most common units have a single healthpoint, and once lost are now dying. Healers and medics are available, but you wont be able to reach everyone.

Model sizes vary between small bases of 30mm all the way up to 80mm for some of the huge monstrous beasts that are out there. Once I can get a hold of some these I will post up. One of the fun things is that ganging up can really make a difference on how combats turn out. Or hidden assassins with smoke grenades trying to take out a target that is holding ranged weapon attacks knowing an assassin is lurking somewhere.

Some of the special templates include arc attacks, basically a sweeping close combat attacks that can hit every model in front of them on a 180 degree arc. There are various blast sizes too, from 1"r all the way up to 3"r. Stream attacks and spray attacks from flamers, shot guns, Ion Cannons and more.

The one thing to remember about Dark Age, is that it is a deadly world. The battle on the tabletop is dangerous, and the flow can change fast.