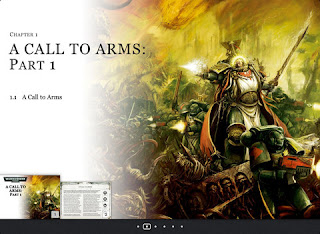 A Call to Arms is a Games Workshop digital release that many people, including myself have not paid much attention to, if even known about. As the final installment of Call to Arms is released, there were ads on the last page for other digital books that have not yet been released. One is a Dark Angelo Alter of War.


For those not familiar with A Call To Arms, here is a brief rundown of what the product is, and the email I received about Alter of War follows.

A Call To Arms

A Call To Arms follows four hobbyists as they collect new armies for Warhammer 40,000, detailing how they chose to collect, model and paint their forces. Featuring Chaos Space Marines, Dark Angels, Necrons and Blood Angels, this volume offers insights from experienced gamers on collecting competitive armies, building themed armies, and plenty of ideas to inspire your own collections. A Call To Arms: Complete will be automatically updated with new content each month, and collect all five instalments for the price of four individual books.


Altar of War
via Matt (from the Feait 212 inbox)
I got to see a picture from GW of an upcoming Alter Of War Battle Missions book specifically for Dark Angels. I bought the Ultimate edition of A Call To Arms and received the final installment today. On the last page, GW had ads for other digital books and was of them was the DA Alter Of War. When I clicked on it, I got a message saying that it wasn't available for purchase yet since it wasn't in the Apple bookstore yet. Anyways, thought I would pass that along. Thanks for all the good news and rumors!