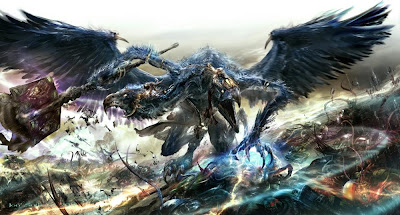 Most readers here know I have an opinion that goes against the grain when it comes to the rumored February's codex and army book release of Daemons. Even though its backed up by behind the scenes rumors and is directed towards 40k only, I want to move past that, because there is a ton of information floating around regarding Daemons, and In reality, it would be cool to get two 40k codices out in the first two months of the year. So lets assume I am wrong (I hope I am), and there is a double Daemon release in February.


Here is the latest and greatest regarding Chaos Daemons and the Daemons of Chaos books to be released in February. This compilation was put together by Zion over on the Horus Heresy forums. (actually note, that as far as forums go.... this is one of the few that I actually enjoy being on and reading).


Compilation via Zion over on Heresy Online
Daemon Rumours
For those who just want the quick compilation here it is (actual links and rumour postings are below the compilation for those who want to see where this is all coming from):

Writer: Jeremy Vetock (both books!) (if this is true, it might be why we haven't seen that much from him recently prior to the DA book)
Projected Release: Dual Release in Feb (primarily gathered from other rumours)

Undivided
Chaos Beast (Maybe this guy? ) Approximately Daemon Prince sized/about twice as tall as a Bloodletter
Furies getting redone. Approximately Gargoyle sized with bat wings and a number of different head options (heads are 2 section heads like the Bloodletters). Dual kit with a ground based model option as well. Plastic kit.
New Elite Daemon Engine. Approximately Dreadnought sized. Lots of options with some God-specific model bits. Rumoured to be unique to Daemons.

Khorne
New Greater Daemon Model (Resin Conversion Pack to make Named Greater Daemons)
Jes Goodwin rumoured to be the one who sculpted/is sculpting the new Bloodthirster
Khorne Chariot (2 Bloodcrushers pulling something that looks like a wagon) with a Herald or some kind of new model that looks like it's belching fire.
Some kind of large flame belcher thing (maybe same as the option for the chariot?)
New Bloodthirster reportedly is a little shorter than the Dreadknight, hasn't changes too much in style though.

Tzeentch
New Greater Daemon Model (Resin Conversion Pack to make Named Greater Daemons)
New Chariot, pulled by screamers with Horrors riding it. Has an alternate Large Flamer (Pyrocastser perhaps?) rider option too.
Large Flamer (Pyrocaster perhaps? Maybe the same as the chariot character) “instead of horrors” (again, I have no idea what they mean by this, as it's an odd statement that doesn't make too much sense).
New Lord of Change is the tallest of the new Greater Daemons (not counting the wings). Apparently less hunched than before, and has a “fishy looking” option.

Slaanesh
New Greater Daemon Model (Resin Conversion Pack to make Named Greater Daemons)
Plastic Fiends were in the works. Current status unknown.
New Keeper of Secrets is a whole new design, shirking the old design and the FW one for something different, but still “very Slanneshi”.

Nurgle
New Greater Daemon Model (Resin Conversion Pack to make Named Greater Daemons)
Large Base Palanquin, Nurglings, Daemon Prince Base, Fat Plague Bearer (I'm not sure what this one means, this is the actual sentence from the rumour)
New Ku'gath design?
No Blight Drone
Some kind of large Nurgle flies being ridden by Plaguebearers
New Great Unclean One reportidly the best of the new Greater Daemon options (“absolutely rot, in a good way”)

Other
Rumours of a Chaos piece of terrain, no word on if it made it past the idea stage or if it's just wishlisting.
No word of other Exalted Chariot options at this time
All models are designed for both Fantasy and 40k now
Only Characters getting models are the ones who haven't gotten one yet
Daemons update will not be a huge overhaul to the books, mostly an addition of new models (I'm guessing some rules changes, points costs and some statlines will get tweaked a bit too if the WD update is anything to go by)
New Greater Daemons looked bigger than the old ones, might be moving to a larger base size
Greater Daemons might be wave releases instead of when the book drops.

The Rumour Posts:
These are all from Warseer's Fantasy Rumour section, though from the rumurs they should also carry over to the 40k codex which is supposed to drop at the same time (if the rumours are true).

Harry on Warseer:
In an effort to pull together what few rumours we have …
I have started threads for each of the armies rumoured to be somewhere in the pipeline.
I will do my best to keep the first posts updated as more rumours appear in these threads.
I have tried to remember as much as I can of what has been posted so far.
I will have missed or forgotten some of it ... so, any rumours that have been posted please just remind me ‘who’ said ‘what’ and I will update this first post.

Daemons of Chaos:
I know we have only just had a wave of Daemons but now we have this from hastings:

Release Date:
"The daemon rules should be taken as a stepping stone to the updated book (much like the wd vc terrorgheist article) next 4 books (for both systems are all chaos (in one form or another) and will hit within 4-5 months for all of them". (Hastings).
To clarify....Books: CSM, WoC, DoC, Chaos Daemons
All will be realeased within 4-5 months of the CSM codex hitting (sep afaik) (Hastings)

So we are talking february at the latest?
Author:
Unknown

Rules:
Unknown ... Beyond those suggested by the rules booklet in the recent WD

Models:
All 4 greater Deamons will get plastic kits (with head/weapon options plus wfb/40k specific bits on sprues) and that there will be "resin conversion packs" to make "named greater Deamons". (Hastings) No idea of timescales on this. I am not expecting them to arrive together Or with this wave. (Harry)
Jes Goodwin is rumoured to be doing the Bloodthirster. (BRING IT ON! ) No timescale for this. (NatTreehouse)
Khorne chariot, two bloodcrushers pulling a wagon with herald option or some fire belching thing. Large base
Tzentch chariot, pulled by screamers, with horrors riding, but I've also heard it has a large flamer rider too. Large base
Nurgle palanquin, nurglings, daemon prince base, fat plague bearer.
4 GD with variants for named daemons and swappable options, most rumors point to resin packs, but I've heard wind its all in the plastic kits lately. I'd lean towards Harry's news, but I hope for all in one myself. I have heard that these may be moving to the larger base now, if so, they will be huge. One can hope, but I don't have a lot of confidence in this bit.
Furies (no dual kit options I've heard of.) in plastic.
Plastic fiends were being worked on at one point, but I haven't heard anything about them recently.
New elite daemon engine. 40k Dreadnought sized. Lots of options. Quasi-God specific bits like the soulgrinder. Supposedly unique to daemons not the same as this new unit for chaos space marines.(Stickmonkey)
Big khorn flame belcher thing
Tzeentch Larger flamer instead of horrors.
Sounded like more ranged options for the daemons.(Stickmonkey)

Harry:
Maybe their are just two books ... with daemons included!!!

EDIT: Although hastings is pretty clear...
To clarify....
Books.
CSM
WoC
DoC
Chaos Daemons
All will be realeased within 4-5 months of the CSM codex hitting (sep afaik)

Stickmonkey:
Quote:
There has been some chatter on a demonic terrain piece, but I'm putting it down to wishlisting for now, nothing solid. Portal? meh. Shrine? meh.

I got to see the Ku'gath designs recently. Pretty Ace. The lab is wild, with nurgling assistants. I'm looking forward to seeing it translated to a model.

No more exalted chariots...at least not that I've heard of.

I did see a design for a big unaligned chaos beast of some kind. Looked like a oversized bear with a toothy maw instead of a head. No idea if it ever went on to be a model. Probably daemon prince sized. Design had a bloodletter drawn next to it which may have been half it's height.
I'm thinking the Chaos Beasts might be based on this guy. He's about twice the height of your infantry sized models after all.

Hastings (in response to a question regarding the Blight Drone being added to the 40K codex, this was confirmed again in the Fantasy rumour thread as a valid rumour):
Quote:
Not blight drones but similar, I can see 40k players using the FW blight drones instead of the big nurgle flies ridden by plagubearers that are getting released.

Stickmonkey:
Looks like my sourcing is again off on timelines. So I'm putting in an update on it here, lots of things have changed to me since my last timeline thread. (I want to repeat, these are rumors, almost none of this really "changes" per se, GW's got their plan, I don't, I get information that aligns from a few sources and try to base what I tell you on that)

Was correct on WoC for Nov, as that's in the bag now, moving on to Dec.

Jan:
Daemons. Still on track. Vetock doing WFB and 40k books, but I havent had confirmation that the books are actually coming in Jan. Expect Greater Daemons in plastic, a couple new chariots, a new daemon engine, and a couple new characters (well...characters which have never received models) Word is the Daemons update will not be a huge overhaul to the current book. Expect few new units. But the new GD models are phenomenal, love every one of them, especially the new GUO. None of the new units are single system, everything is in both 40k and WFB now.
Obviously he was off on Jan (that is Dark Angels), but the other stuff he mentions lines up with other rumours, and he gives us an author.


StickMonkey...
I forgot about Furies. They have been redone, they are coming for Daemons, they look so much better than the current models. The question will be if their rules make them worth it. They are about Nid Gargoyle sized, maybe a bit larger. Bat wings. Much more daemonic heads with toothy maws in 2 parts like the horrors and bloodletters. Not the bat men of old. Dual kit with a new ground based daemon, much like the vargheist/crypt horrors (which I've mentioned before).

There are a lot of questions winging my way about the GD. So to try to address those:
1. I don't know for sure all 4 will be released at once or if they will be in waves.
2. I have conflicting rumors they are moved to the oval base and are roughly the size of the beastmen gorghon, vs staying on the 60mm round bases. Based on my personal eyes on on WIP before, they are bigger. The GUO was not as big as the FW model, but its bigger than a dreadnought. My source says the GUO is the best looking of the new models, that it is "absolutely rot, in a good way".
3. The BT should be slightly shorter than the dreadknight. stylewise it hasnt changed much.
4. The KoS is the most changed style wise. Does not go towards the FW model or retain the style of the current GW model. Still very slaaneshi
5. The LoC AFAIK is the tallest of the models, not just due to the wings. Did not appear as hunched as before. Head options include a more fishy looking option.
__________________