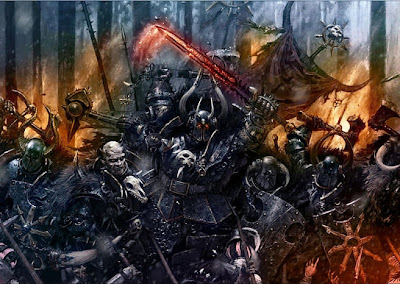 Here are two sets of rules taken from the upcoming White Dwarf for the Warriors of Chaos. There is quite a bit here, but somehow I feel that these sets are a little light on what we normally get gleaned from a White Dwarf release. Perhaps it just because its not 40k.


So please give these a little bit of salt, as these are rules taken from the upcoming White Dwarf, which means errors can still be present.

Stuff we know from White Dwarf:

Forsaken are a core choice. Forsaken are M6 and D3+1 A. Has it's own D6 chart. One result is ASF.

WILL OF CHAOS is not listed beneath lords, heroes, knights etc. Only eye of the gods

Mutalith has a bound spell ranged 18’’
Seems it does a toughness test (model/unit?) and there is chances of chaos spawns being produced

Marauders did not seem to have marks

Slaughter beast is a rare choice and is a bound monster. It is bound to your lord and can have the lords WS.

Gorebeast chariot is T6 5W. high Armour save (2+?). It has KB even on Impact hits. Slower than a normal chariot

MAGIC
marked casters can choose a different lore or stick with their mark:

Slaanesh is Lash of slaanesh. 24" straight line form the base in forward arc of the caster. Every model under the line receives S3 AP hit.

Nurgle Sig spell is a Template. You place breath tempalte at the base of the caster.
All models beneath are forced to test T or suffer 1 W with no AS.

Nurgle Attribute is that on a succsessful cast roll a D6. On roll of 6 the casters T an W are both increased by 1 to the end of the game.

Slaanesh Attribute is for every wound caused by a spell, roll a D6. if a 6 is rolled the caster recieves +1ws/+1A/+1I

Tzeentch Attribute is for every 6 rolled on a successful cast, that caster recieves an additional PD. But only that caster can use the additional dice.