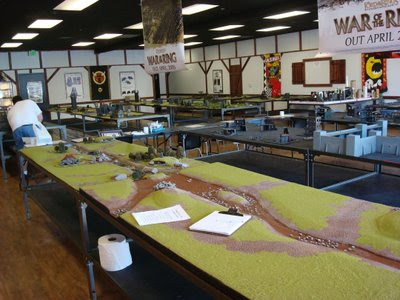 So its official that the LA battlebunker is being downsized into a small store with only a couple tables. Which is sad, because I know they had just hired a bunch of people within a year or so down there. Are Battle Bunkers going the way of the Dinosaur?


I have also heard that something similar is happening to the Chicago Battle Bunker. This is a strange one as I had thought the Chicago Bunker would stand the test of time, but the manager at the new and upcoming Portland Oregon store, is from the Chicago Bunker. I have not found an official release that this is happening, so perhaps Chicago is still in the rumor stage.

Here is the official news for the LA battlebunker.

We thank all of you for your patronage and participation in the activities and events that have been showcased at the Los Angeles Battle Bunker over the years. Though our new store won’t be designed around hosting large scale events, you can be assured that you will still have access to the same, great range of Games Workshop product as before, with the ability to enjoy a friendly game and improve your hobby skills in a smaller environment.

This Games Workshop Hobby Center format will allow us to better deliver on great customer service to our wide range of customers who are working on their own collections of models. This change also allows us to better focus on recruiting new customers to our great hobby.

We truly appreciate all of our customers support within the Los Angeles Battle Bunker and we would like to invite you to visit the new Hobby Center beginning on February 27th.