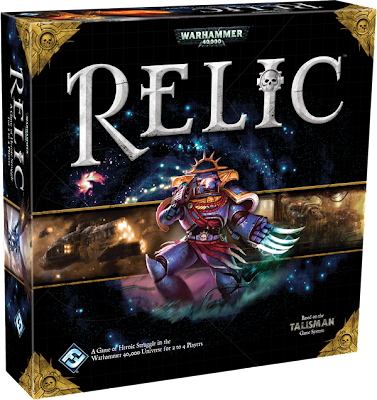 Board Game gamers that love the 40k universe will like that Fantasy Flight Games is getting closer to releasing their new game Relic. It is a board game that expands upon the Talisman game, but set in the 40k universe.

via Fantasy Flight Games
In a far-flung corner of the universe, a Warp rift has opened in the Antian Sector, and the Imperium wants to investigate whatever secrets it may contain. In Relic, the Talisman system is adapted and interpreted to better suit the grim and war-torn universe of Warhammer 40,000. Two to four players each assume the role of a powerful hero and bravely venture forth to shield the Antian Sector from certain doom. By completing missions and defeating enemies, characters compete to gain rewards and experience, furthering their chance of being the first to defeat whatever evil lies beyond the Warp rift.

Coming later this quarter, Relic will bring the universe of Warhammer 40,000 to life by expanding on the Talisman model in an exciting game where every choice masks an array of unforeseen consequences and challenges.