Daemonic Whispers. Some Details on the Horizon 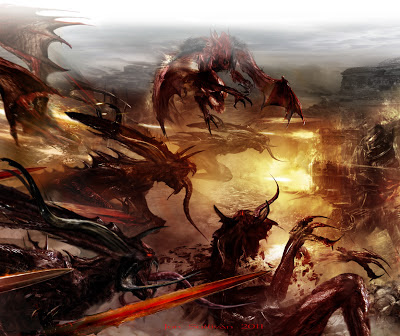 More Daemonic whispers are being heard, and while we know that they are right around the corner, they are keeping their secrets with the Lord of Change to add to our confusion.

Here is a good rumor bit from Larry over at Bell of Lost Souls.

via Larry Vela on Bell of Lost Souls
Voices in the Wind say:

Schedule
Look for dual 40K/WFB Chaos Daemons army book-codexes in Feb/March.
They should be in the March White Dwarf, and hit the street end of February

Rules
- Daemon Princes with Wings will move slots in 40K.
- Look for across the board points increases in the codex/army book.
1/18/2013
Natfka
40k, 6th Edition, Chaos Daemons, Daemons of Chaos, Rumors, Warhammer 40k