A Letter from a Playtester: Odd Game Mechanics 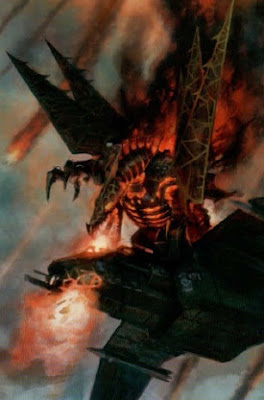 This email came in this morning from a playtester, it introduces us into an odd game mechanic, a unit that can switch from a flyer with hull points to a monstrous creature that has wounds during the game. While the unit was discussed as a Heldrake, the game mechanic obviously did not get past early testing and make it into the Chaos Space Marine codex. Could something like this make it into the Chaos Daemons Codex?


Another highlight, although not the topic of the email...... Lizardmen in November.

Please remember that these are rumors, and to take them with adequate salt. We are simply receiving this email as a means to get a wider discussion going about it. (btw some of the things we have gotten in the past are for this reason, so yes your comments matter)

So please take this post as something to discuss the idea of this game mechanic. Opinions Wanted.

via Playtester from the Faeit212 inbox
I have previously worked playtesting both Lord of the Rings and Warhammer Fantasy but don't want to discuss my career too much because those in the games designers have such unique backgrounds that I'd be too easy to suss out. I was very involved in working through fundamental changes put into the Fantasy Battle 8th edition core rules, and its follow through with the Storm of Magic expansion. Look out for Lizardmen in November.

Sometimes I get taken into 40k for pie-in-the-sky early-stage testing. Lots of us do this, often on a very casual basis. I'm less familiar with the different armies mechanics for that system, and so can help 'idiot proof'  army book mechanics where they break the core rulebook system.

I wanted to let you know about a mechanic I "tested" casually at the end of last year. I want to get it out on the web because its such a strange game mechanic that I'd like to hear a wider discussion, and can't guarantee that it will appear exactly as we play tested it. It also means the gaming community in general can feel around the idea without someone losing their job

The basis of the idea was to take advantage of the two 40k rule systems for flyers; standard flying vehicles with "hover mode", and "flying monstrous creatures"; to create an in game unit which is flexible and unpredictable - (and therefore exciting to play).

The model can choose to switch from one profile to the other at the start of a player's turn, and then remains in that profile until the start of their next turn. Both profiles have the same number for wounds & hull points - and they are effectively the same.

Anyone who thinks this is ridiculous, I actually play-tested this unit under the name of 'Helldrake'. The only thing I couldn't figure out before was what kind of unit would make sense both as a vehicle and a unit with a toughness stat.

Needless to say the rule didn't make it in. But I've heard from a friend that the idea didn't die.

I think that GW are re-conceptualising some of their unique selling points, and that they're looking to combine centre-piece new releases with rules that get the gaming community fired up and coming back into the fold.