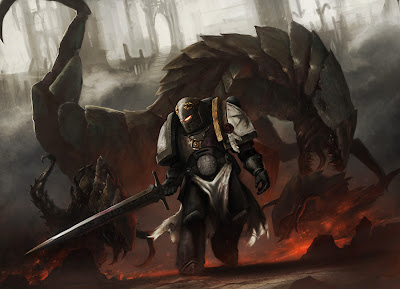 We have heard little bits that the Black Templar were just getting started, and this rumor bit seems to confirm that. The big questions and answers are that the Templar are not getting rolled into the Space Marine codex, are not getting the White Dwarf treatment, and that Phil Kelly is writing it.


Other than that, we have some bits about who is writing the other codices. Robin Cruddace  is doing Tau Empire, Phil Kelly is doing Eldar,  and Matt Ward is doing Orks. Not sure where Jeremy Vetock is at, but perhaps doing a fantasy army book.

Please remember that these are rumors. Always add salt.

via MarikLaw over on Warseer
Black Templars Rumours
No rules to report, just tidbits about the Codex itself and why it's so far down the pipeline. Please take this with a grain of salt, as I can't be sure of the accuracy of the information given. This is not exactly word for word as I'm going off of memory, as I spoke to this person in person. He was a rather talkative bloke from the UK who had an impressive collection of GW-related books and miniatures, including some rare pieces I've never seen in person before.

Q) Are Black Templars being rolled into the next Space Marines book?
A) Heavens no. For how old the book is, Templars still draw a presence at tournaments and there are many fans of the Boys in Black within Games-Workshop. Simply slamming them into Codex Space Marines was not an option as far as they were concerned as it would "tip the Space Marine codex from full to bloated" in terms of units and special characters.

Q) So are we getting a White Dwarf Codex to tide us over until release?
A) No need. Typically White Dwarf Codex releases are for armies which need an update but are still at least 2 years off. Black Templars will be out sometime 2014 after Orks and possibly after Tyranids, as the Nids are a high priority at GW right now.

Q) So why is it the last 4th Edition Codex to be released when it's now one of the oldest?
A) The reasoning behind this is actually quite simple. Where as the other 4th Edition armies just needed minor-to-moderate rules work, a few new models, and maybe a new unit or two, the Black Templars needed much, much more work. GW might as well be making a new army from scratch with the amount of work they have to put into this release. They need to create a large number of new units, a large number of new special characters, and models to go along with all of them. This is the most work an army has needed since the initial releases of the Necrons and Dark Eldar, so you can imagine that it is not something that can be done quickly.

Q) So Black Templar players don't have to worry about their army being phased out?
A) Exactly. Games-Workshop was adamant that they were avoiding "going the way of the Squats" with any of their current armies for 40k.

Q) Any rules tidbits you could throw my way?
A) Wouldn't be much of a point, really. The rules haven't even entered into major play testing yet and are still in an incredibly fluid state. Unlike during later stages of play testing, where rules might change from month to month, at this step in the design phase rules change on a weekly, if not a daily, basis. I really don't want to get people's hopes up with rules I've been told only for them to turn around and change it or completely get rid of it a day later.

Q) Who will be writing the book?
A) Phil Kelly.

Q) Who is writing the other upcoming books?
A) Robin is doing Tau Empire, Phil is doing Eldar, Matt is doing Orks, and then Phil is back on duty doing Black Templars. Can't remember who is doing Tyranids, it's either Phil or Matt. I think it's Matt but I'm not 100% on that one.