Presence of Faeit: Angels and Daemons 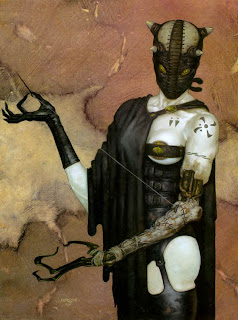 This was rather busy at the last minute with rumors about a new flyer wave that seems to be on the very near horizon, but what dominated the gaming news, was anything Dark Angels. The codex is out, and its a good read.

Dark Angels: First Thoughts
I have the codex, and really enjoy it. My first impressions of course are that the codex will be up there on the competitive side once people starting breaking it down. Like CSM it appears 6th edition codices allow an extremely different and wide options approach to what you can and will be fielding on the tabletop.

I was especially taken by the cheapness of Tactical Squad and their cousins the Devastator. With flakk options able to be taken in many places (tacticals, veterans, and devastators), do Dark Angels really need to field a flyer? Im not so sure.

The cheapness of the DA tactical takes me back a large number of years where 5 man tacticals ruled the scenes simply because it was 5 marines and a heavy weapon that were available. If I recall it was 90pts for a tactical squad with a lascannon. Amazingly enough it is once again 90pts for 5 guys and a lascannon. 95pts however seems to be an ideal, simply because you can get all the missile launcher options for a rather cheap answer to almost any tabletop situation.

Will you see 6 of these squads in low point games immediately? No, simply because there are a lot of new shineys for people to play with first. However, I fully expect to see a lot of these cheap troop choices making their appearance on the near horizon, as it really opens you up for a full court press with other aspects of the codex or allies.

So yes, Devastators 70pts base with 4 missile launchers is 170 with full flakk options.

Flyers and Deamon Waves
Whether or not the next White Dwarf is Daemons or Flyers doesn't matter much to me. The highlight for me is that its two months of 40k that gets me all excited. Yes, I am drooling a little bit on the next flyer wave, but waiting a month is OK.

So from sources it does look like we will be seeing that elusive flyer wave we have been waiting for  so long to see. If you have been following the rumors this week, the rumor mill was saying that it was either this coming month or next month (probably March) that we will get the flyers. I like it especially since it seems that we will be getting an insert or data sheet on the new units. So fingers crossed the Harpy gets some new update from the current codex.

Dark Age
So with two starters and the rulebooks, I have been sitting down and learning a new game.... Dark Age. It really has some amazing models in there, and the game itself is fun to play. I was able to squeeze in 5 games last night at 300-500pts.

This is a fast paced skirmish game, that can get quite bloody fast. I think I was amazed when my Gazelle (a large brood unit) quickly ripped apart one unit, was able to move and charge through into the next unit and so on. I think she was able to rip apart 3 separate units until she finally got bogged down against her 4th enemy. She went down to a squad of Harpies charging in shortly afterwards.

So expect to see more on this game in the near future. In Dark Age the phrase "there is only war" does not apply. In its place, Dark Age uses "Everything Dies", and its appropriate with the post apocalyptic setting on a backward non-habitable wasteland of a planet.

Games of 500pts takes about 45 minutes or less.

The pic at the top of the article is artwork by Gerald Brom who's gothic fantasy artwork is the inspiration and setting for much of this game. The pic above is a Grafter.