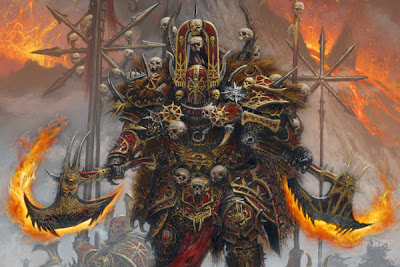 Warriors of Chaos are out only in  a few short days, and with that I was digging to find a good round up of what is expected for the release. So here it is, a compilation for the upcoming army book, Warriors of Chaos.


Please remember that some of this is updated from the White Dwarf, but is all still to be taken with at least a little salt until the arm book in actually in your hands.

via Vyslav  on Warseer
WoC in Feb
Looks like WoC are going to be coming in Feb.

UPDATED with info from WD - thanks to wamphyri101 for consolidating these.

Advance Orders 26th January for release on the 2nd of Feb

Stuff we know from White Dwarf:

Forsaken are a core choice. Forsaken are M6 and D3+1 A. Has it's own D6 chart. One result is ASF.

WILL OF CHAOS is not listed beneath lords, heroes, knights etc. Only eye of the gods

Mutalith has a bound spell ranged 18’’
Seems it does a toughness test (model/unit?) and there is chances of chaos spawns being produced

Marauders did not seem to have marks

Slaughter beast is a rare choice and is a bound monster. It is bound to your lord and can have the lords WS.

Gorebeast chariot is T6 5W. high Armour save (2+?). It has KB even on Impact hits. Slower than a normal chariot

marked casters can choose a different lore or stick with their mark:

Slaanesh is Lash of slaanesh. 24" straight line form the base in forward arc of the caster. Every model under the line receives S3 AP hit.

Nurgle Sig spell is a Template. You place breath tempalte at the base of the caster.
All models beneath are forced to test T or suffer 1 W with no AS.

Nurgle Attribute is that on a succsessful cast roll a D6. On roll of 6 the casters T an W are both increased by 1 to the end of the game.

Slaanesh Attribute is for every wound caused by a spell, roll a D6. if a 6 is rolled the caster recieves +1ws/+1A/+1I

Tzeentch Attribute is for every 6 rolled on a successful cast, that caster recieves an additional PD. But only that caster can use the additional dice