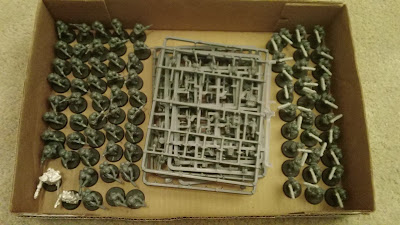 Yesterday I put myself to the task. I had a ton of models that I have been wanting to get put together, so I did it. 78 models put together in one day (not one sitting). Now ready to be painted.


So what was I building? Of course it was guardsmen for that many models to get worked on all at once. To be more exact 48 of them were guardsmen, while the other 30 are IG models, but I added to them several Grey Knight bits as they are to be my Warrior Acolytes.

I did not quite get to everything, I ended up not completing 6 Inquisitorial servitors, and 4 additional  acolytes with storm bolters. But I accomplished my goal, so that I can start getting these models ready for the tabletop. With so much to build, I needed to be able to get in a good push on the biggest batch of it.

Now there is no way I can get that much painting done in one day, even with the most basic methods.

In this hobby, I don't think I know anyone who has every model in their collection painted and ready to go, even though its a goal for every single one of us. Often even, the projects get so deep and so many that there are just too many of them to ever get done.

Hence why it was time for me to bury the hatchet, and get these models built. Unfortunately sometimes putting together the grunts can get a little tedious. 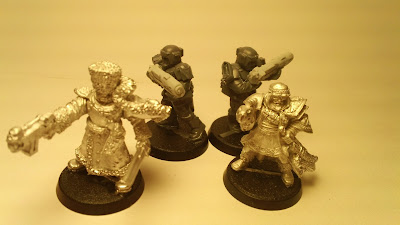