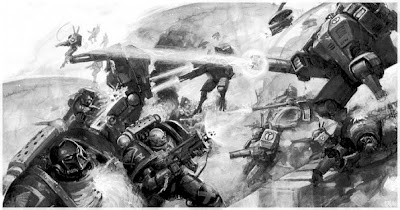 Earlier today we had a rumor leak that was saying that flyers are on their way. Of course I have been inquiring with a few people that are in the loop on any details or confirmations. Well a confirmation came in, with a few adjustments.


The main adjustment is the flyers are really scheduled for March, and that daemons are still in line for February. Either way its exciting, and 40k will really be hopping over the next few months.

So which will it be? Daemons or flyers in February? Either way it looks like we will see one in February and one in March.

Another exciting thing is too look at what else was mentioned. Fantasy update in April and then a 40k release. A lot is ahead of us, so 2013 is looking up.


via a well connected anonymous source in response to the earlier rumor linked below
All of those are accurate, but it's an air caste pilot who is tau, not an alien.

There are some expanded vespid options being explored and the Tau empire is really being fleshed out as a commerce driven "all are welcome if they serve the common good" attitude.

the current schedule calls for Daemons in feb and flyers in march.

A fantasy update in April and then it's 40k and a little bit of hobbit from May to August with a new supplement and then a big launch in September for 40k, then a fantasy fall and shares Christmas.

Anything more than 2-3 months away though is subject to change except that this summer is getting a really awesome 40k supplement.

The rumor above is a response from a different source to the following rumor that is from earlier today.
http://natfka.blogspot.com/2013/01/february-white-dwarf-revealed-it-is-not.html

The harpy for tyranids. Nothing to note. Not a dual kit.
The final surprise.  A fourth flyer.  The long awaited dark eldar bomber