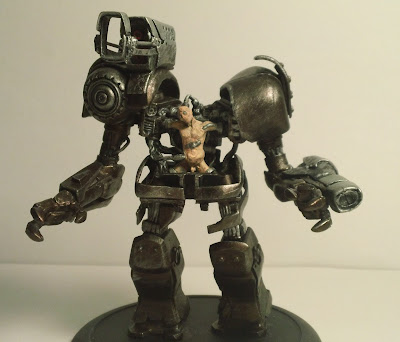 The Abomination model is almost done, so I figured it was time to do a full on review of the model, and show it off a little bit. It is by far the most complex and difficult model I have put together in awhile, and it is also one of the coolest (is that a word?).

Here are some pics. I still have some highlighting to do, in order to add in some color in places. 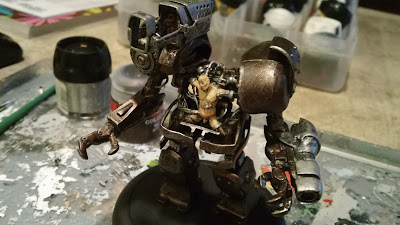 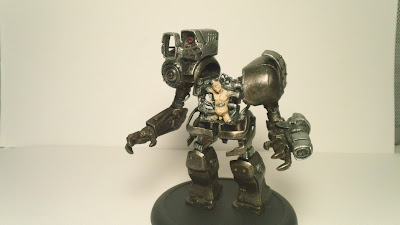 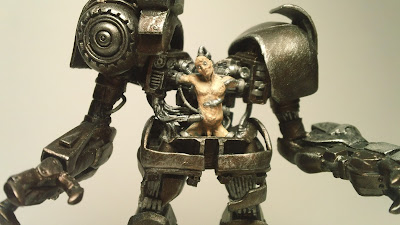 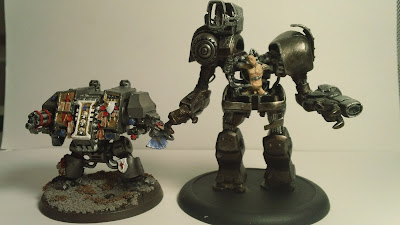 Dark Age
The model is for Dark Age, a skirmish level tabletop game, with many of its models based off the Gerald Grom's artwork. Its a great game, where the action occurs at a very fast pace, and the tide of the battle can be one and lost before you know exactly what happened.

Abomination
The Abomination itself is from a faction called "The Skarred". The pilot of the machine is a fanatical follower that has chosen to accept the Ultimate Grafting, permanently fusing his body into the machine. A crude life support system keeps the body alive, although the controllers psyche is almost completely destroyed in the process.

The Abomination comes onto the tabletop towering above all but the largest of opponents, wielding a high-intensity Ion Cannon capable of ripping through multiple targets in a single shot, and a Pod gun, which can fire in multiple bursts to take down larger opponents from a distance. Get to close and this beast has two massive robotic fists to tear apart anything unlucky enough to be within reach. Over all its a huge robotic beast, that if not dealt with quickly, can rip apart its opponents on the battlefield.

The model
The model itself is a mix of resin and metal parts. In fact the biggest drawback to assembling this model is how may metal parts it has, with no real instructions on how to put it together. I have been told though, after I emailed in a question about it, that an online manual or diagram is already in the works to solve this issue.

I was able to figure out how to get this together, basically through someone else's mistakes and pictures on the Dark Age forum. Because of this, I plan on posting a basic set of assembly pics, to aid dark age players that are ready to build this model.

Over all, the model went together really well, and the only real problem with the model, is that the left arm of the pilot does not meet up with the machines part where it is supposed to. I will be inserting a little bit of green stuff at a later time, as I wanted to put the model together as it came.

I love the aesthetics of this model. It is dark, even a little bit creepy, and fits right into the Dark Age model line. In fact it can very well be the centerpiece of your collection. There is quite a bit of detail, all the way down to the crude wires and tubes under the pilots skin that are visible bulging and piercing through his flesh.

The model is huge, much larger than a dreadnought, which I had figured before receiving it, was the correct size of the model. So I figured I needed to show a size comparison in the photos.

While I am not one to often pin my arms and other pieces to a model, the Abomination, and Dark Age in general so far, does not require pinning. Metal bits fit down deep into molded slots that help on many of the pieces, or in the case of the abomination, the arms are on balls so that you can purposely choose its pose, and get the maximum surface area to hold the appendages in place. I am more of a gamer than a modeler. So I have probably used the incorrect verbiage  but for someone like me, the extra time put forward by the designers or sculptors of the model to get it together are greatly appreciated. 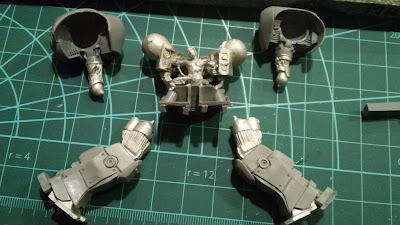 Overall, I love this model, and cannot wait to get it to the tabletop for a game. I would have to say it is one currently one of my favorite models that I have put together. The model deeply falls into the flavor of Dark Age, and on the tabletop, is a monstrosity to terrorize your opponent with. 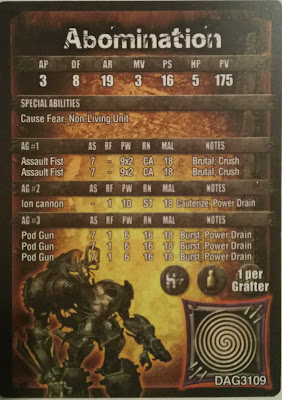