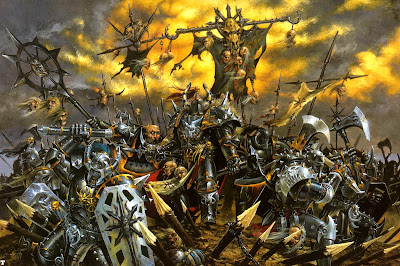 There is a second Question and Answer session for the Warriors of Chaos army book, which is only a few days now from being released. The answers here are apparently from someone that already has the army book.

Once again, these were collated by Johan Märs over at Dice and Brush.

d3 units within 12" get a roll on the EotG table, roll 3d6 and remove one die of your choice to gain result.

Chosen when deployed, or coming on the table from reserve roll on EotG table, roll 3d6 and remove on die, roll does not effect characters


Q: Probably likely that the guy giving us these 'rumors' read it wrong and that it has been brought in line somewhat with how other war machine crews work. We'll see though. The Hellcannon is an unusual instance in that it can still live after the crew are dead. I'm hoping the crew are just removed first when taking wounds rather than hitting them on a 5+.

A: Its a monster, with a shooting attack now, so not a warmachine at all...

Q: It's even possible that now is a warmachine and not a monster with handlers.

A: Its not a warmachine, and it is still monster and handler is like its 4 special rule.

Q: Are chaos knight actually 5 points more now that you have to pay for ensorc weapons? Im asking cause all the other cavalry in tge 8th dropped in price.Since they are already expensive. Also chaos trolls if they lost mutant regen and magic vomit arent they exactly same as ong trolls now that cost 10 points less ? Thats quite huge nerf.So im wondering if they still have some special rule to justify costing 10 more?

A: Chaos Trolls are 7*5, with the change to how marks are purchased, medium sized units are drastically cheaper, full command dropping from 50 to 30 points also helps

Q: About chosen, do they choose they first gift now or they still have to roll for it?

A: They do still get the roll. They roll 3d6 and drop one die of their choice, the warsrhine works the same way. Mark of Nurgle, is only CC

Are daemon princess still lvl 1 wizards? Can they buy additionals levels? Are they Unstable?

Any change on special characters? Points or rules?

Are gifts of chaos inside magic items allowance or out?

Is tail attack +d3 on chimera included in base cost?

are Daemon Princess monstrous infantry or monsters? being MI means look out sir at 4+ near trolls and chaos ogres......but being monsters means d6 S6 thunderstomp

Thanks a lot in advance

A: Without point costs, Daemon prince buys each level for the normal cost, starts with none

Archeons swords of chaos get hatred and ItP

Sigvald is T5 now, always gets +1 attack for eye of the gods

Valkia gets +1 S for every eye of the gods roll

Gifts and magic are seperate

Daemon Prince is a monster


via AmaroK on Warseer
I had a brief overview of the book today. What worries me is the third eye of tzeentch gift can still makes a lot of cheese, though not in the same way as it used to. Tzeentch mark still improves ward save (you can easily get 3+ ward) and the third eye makes you rerol 1´s in ward saves. It´s not Kaelth´s like, but almost. Lore of tzeentch is not that impressive now, but the stealing spell one can be pretty nasty if casted by the previous, almost unkillable, mage. I hope its not like this or I missed something in my brief overview.
The rest is more or less ok, though the 50% rise of marauders and their weapons upgrades makes me think they wont be seen so much anymore. The chaos ogres having impact hits in the same way as OK ogres have is nice, and they got cheaper as well. And the cannon having magical attacks, 5+ ward save and
-1 to panic checks and the rest staying the same makes it a better choice now.
About the Warshrine, it still gives the blessing to one unit/models. The bound spell is to affect 1d3 models with the EoTG within a range.

It affects to d3 models that already had the EoTG rule. About the 3d6 removing the lowest, I think thats the way Chosen roll the chart, not sure about the Warshrine effects. The powerlevel was 5, I think.


Q: Oh yeah! Very Important Question: is the "Will of Chaos" still a thing? I.E. Pretty much everybody getting panic re-rolls…?

A: I couldn´t see the Will of Chaos anywhere in the book, I think it´s gone. Not sure if there´s an undividided chaos mark that makes you re-rolls like it was in 6th edition, but as a rule, there´s no "Will of Chaos".


Q: Do you have anything of the Army special rules?

A: Besides the marks things, and the EoTG, I can´t remember any rule army wide. Dragon ogres and Shaggots are almost inmune to bolt attacks/spells , but thats how they always have been, more or less.

Q: so nobody complains about warshrine's effect being a bound spell, combined with vorpex beast bound spell? Add a lvl4 sorcerer and low energy dice... to fail completely. Or people will probably save their dice to dispel both bound spells (like we do with casket of souls)

A: The casting values of most lores aren´t so high. Most are around 8, and the number 6 ones are not that great if you consider the big spells of doom of the BRB. I think the strategy will be mostly many casting of low difficulty spells. As an example, the Tzeentch spell that may steal one of your wizard´s spells and decrease a wizard level as well is just difficulty 8. But time will tell :P

Q: can undivided characters join marked units and viceversa?As I understood it, marked characters have to join a unit with the same mark.

A: Not sure how undivided works, or if its considered a mark itself, or if its still there. The will of chaos rule is gone, so... But considering two characters with different marks can´t join the same unit, I guess undivided would count as "no mark", or there would be no point on this last ruling.

Q: aluc, what options do chaos ogres get? Also is their impact hit thing just like the regular ogre bull charge now?

A: They come with a pair of points more than an ogre bull, but they have heavy armor as well. Options and stats are the same as before, and the charge is exactly the same OK ogres have, including the d3 impacts if you roll 10 or higher on the charge.


Q: Could we get a little bit of info on the magic items/standards? Effects, category, etc...

About magic items, the helm of many eyes stays the same, improving your armor save on top. Theres a sword that can create spawns when slaying models, a chalice that may turn your character into a demon prince or wound it (rolling a d6 chart) and some other items. About gifts there are more than magic items, the fanciest of them is the third eye of Tzeench, making you rerol the 1´s for ward saves, only for Tzeentch miniatures. I hope this isn´t as cheese as it smells :S