Cover Pic: Death From the Skies 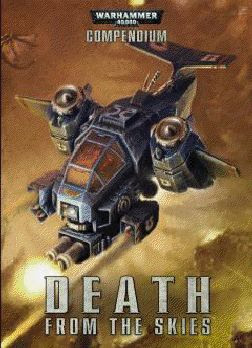 It seems now we have a cover for the 40k flier supplement "Death from the Skies". It looks like this compendium is real, and is just around the corner with a rumored release date of February 16th. I have included below the rest of the current rumors surrounding this release.


Although this looks legit, please take it as a rumor until we get something official.

via Lorizael (the photo is also from Lorizael)My sources say this will be a 70 page "compendium".
It will have updated 6th edition rules for flyers:
Stormraven (now available to space marines and BT) Storm Talon Ork Bomba / dakka jet / burna bomba Valkyrie / vendetta Razorwing & Voide Raven Night Scythe / doom scythe
also dog fighting rules from crusade of fire and a new flyers scenario. I'm told this book will be a range item and not a limited release.

via KroothawkA new 40k supplement book will be released on 16th February:"Death from the Skies" (26€, mail order only, chance of being in English only).More when I know more. But it certainly sounds like a flyer supplement.via DarkWarrior1981 on Warseer
This is not as exciting as people may think. I saw the advert for the book at a local store; It contains only rules for fliers still on sale or with a codex entry (the Dark Eldar bomber is in), some fliers have their rules updated to 6th edition (whatever this means exactly). The only thing actually new is, that the Stormraven is now available to Codex Space Marines and Black Templars as well. Also you will find the flier rules from Crusade of Fire and new missions. The book will be on sale (no pre-order) from 16th of February, is direct only (so not from your FLGS), english language only and will not be limited stock.
1/30/2013
Natfka
40k, 6th Edition, News Headlines, Rumors, Warhammer 40k