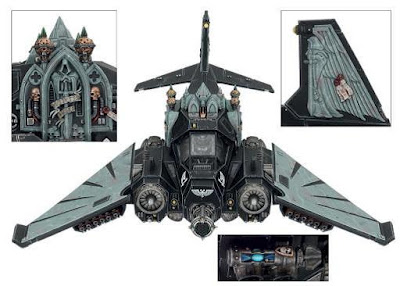 Look what was dropped into the inbox this morning. A copy of the "January new products launch brief". So pics aside, here are the details of what is being released and goes up for pre-order tomorrow. If you have not read one of these in the past, its an interesting read. Also of note is that there are some bundles not available in the US.

To break the code: anything with direct is online only and anything with splash means it'll be in store for a time period/until it sells out


These come to us via Secret Squirrel.

ON SALE SATURDAY 12th January 2013
Features of the release

Dark Angels
Key features of the new Dark Angels releases
•Dark Angels are Space Marines, the most popular miniatures for Games Workshop collectors
•The Dark Angels are featured in the Dark Vengeance Boxed set and these releases will be eagerly
anticipated by the 1000’s of collectors who have already purchased this box set
•The launch products include a new codex, four plastic boxed sets and 2 Citadel Finecast clampacks
•Each plastic boxed set makes a variety of kits (see below)
•The Dark Angels Battleforce and Sammael mounted on Corvex have been repackaged
•A great opportunity to re-promote all the existing Dark Angels Space Marine miniatures and to sell essential
paints for painting Dark Angels (see below)
•Generals of other 40K armies, especially Chaos Space Marines, will have to alter their tactics and collect new miniatures to be able to stand toe-to-toe with these new units

January White Dwarf
Key features of the new January edition of White Dwarf
•Shows all the new Dark Angels and The Hobbit miniatures in all their glory
•A review of all the other fantastic products released in January
•A Dark Angels vs. Chaos Space Marines battle report
•Painting guides for Dark Angels, Tyranids, Great Eagle feathers and Fell Warg fur
•Golden Demon 2012 pt.1 – a 16 page extravaganza showing a selection of winners from Germany, USA,
Spain and Australia
•All these products are available to order on Advance Order from 5th January 2013.
The cut off for ordering to a Hobby Centre, the ONLY way to guarantee
delivery on the 12th January, is Sunday 6th January

Ravenwing Command Squad/Ravenwing Black Knights
•This box contains a multipart plastic kit that makes either 3 Ravenwing Command models OR 3 Ravenwing Knights, a new choice for Dark Angels. Both squads have a host of details on both the bikes and the Space Marines.
•The Ravenwing Command Squad is a HQ choice and allows you to build an Apothecary, Champion and Standard bearer. These bikes replace their bolters with a Plasma Talon and the riders are armed with Corvus Hammers which can crack open even the toughest of armour.
•The elite riders of the Black Knights can form a separate Fast Attack choice
•The kit has lots of additional components on the sprue -eight different heads, 4 different bolt pistols, 3 swords including the Sword of Caliban, 4 Corvus Hammers, a power mace and a plethora of stowage options

Asmodai (Splash)
•A clampack that contains one highly detailed Citadel Finecast resin miniature, a HQ choice in the codex with special wargear and rules
•Armed with the Chapter Relic – the Blades of Reason

Dark Angels Banner Bearer (Direct only)
•A clampack that contains one highly detailed Citadel Finecast resin miniature, an option for an HQ choice in the Codex with special wargear and rules
•Holds a huge embossed Chapter Banner

Codex: Dark Angels
The second hardback, full colour codex for Warhammer 40,000!
•106p with a gatefold summary section
Containing:
•The Dark Angels: Their origins, the fall of their homeworld, the secrets of their dark heritage and their many battles for redemption
•The Unforgiven: All the characters, units and vehicles available to the Dark Angels including lots of new units including the Land Speeder Vengeance, Ravenwing Black Knights, Ravenwing Dark Talon, Deathwing Knights and many more!
•Armoury of the Rock: Full rules for the weapons, armour and equipment used by the Dark Angels and their successor Chapters
•Sons of the Lion: A stunning Citadel miniature showcase certain to inspire collectors
•Angels of Death: An army list that helps collectors prepare a force ready for battle.


Dark Angels online bundles (Direct only)
Dark Angels: 1 click new release bundle
Deathwing Assault
•A ‘one click’ new release bundle that adds a Codex, Ravenwing Dark Talon, Land Speeder Vengeance, Deathwing Command Squad and Ravenwing Command Squad to a customers cart
•Perfect for those customers who want one of everything new!
•Ideal for customers who want to start a Deathwing collection
•Belial’s special rule allows gamers to take Deathwing as Troops
•Collectors can make each of the three squad options in the Deathwing Command box
•A Bundle that gives the customer all the new Ravenwing kits allowing them to make all the variants available and Sammuel on Corvex
•ONLY available in Europe and Australia

Hunt for the Fallen
Ravenwing Attack Squadron
•Every new Ravenwing model, and in multiples allowing you to make every variant... and a battle force!
•This is THE collection for any self respecting fan of the Ravenwing
•ONLY available in NAS

Other great Dark Angel products and ‘add-on’ sales
Dark Angels Chapter upgrade frame
There are several great Direct only products available to Dark Angels collectors – here is a selection of those available.

Use your terminal to recommend and sell these
great products!