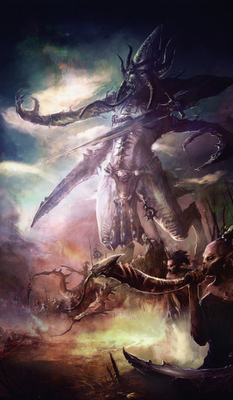 This debate has been around for a bit on whether or not we will see a codex/army book for Daemons here shortly and when it will come. In these separate bits, hastings clears up what he knows, and that is a that a full double release is coming. Codex and Army Book.


He also clears up that all his dates were pre-order dates, which if correct would put the double release not in this next White Dwarf (February Issue), but the following. That would give us a March 2nd release date for the new books.

We have had lots of rumors saying it will be another White Dwarf update, but Hastings is by far one of the most accurate. So my personal opinion (not a rumor which I cant believe I always have to clarify...I am not a source of anything) is that we will be seeing a dual white dwarf update. However, I prefer to be wrong. Remember that my opinion is just based off of what I hear/read/find, with some logic added in. My opinion is just that.... opinion. I collect and report Warhammer 40k news and rumors and sources are always listed below. (anonymous sources are anonymous to protect peoples jobs, so dont ask, I wont be the cause of someone getting fired-rumors are not worth that). Enough rant.

this is a rumor, please take it so.

via 75Hastings69 on Warseer
Whether the update will be a White Dwarf Release or Codex/Army Book
both army book & codex this time round, they'll include the new nurgle flies the khorne cannon thing as well as the stuff that was in the booklet last time in WD