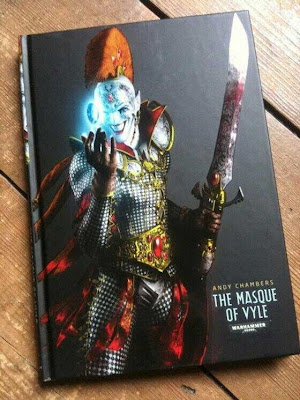 A new book cover was accidentally revealed a few days back, and I had though I already had posted up on it. Seems I did'nt, so here I am trying to catch up with the latest news.

The cover for The Masque of Vyle by Andy Chambers, appeared only briefly before it was taken down. However it was snagged by they guys over at The Founding Fields, so we are able to get a good look at what it is they are working on.


Its very probable that this release will be later in the year, to coincide with an eldar codex release, and possibly there is some good bits in there as well. "Andy Chambers has been around for a long time, and wrote the Path of the Renegade, the first in a series of books about the Dark Eldar.