Dark Angels Codex: Lots of Information from the Codex 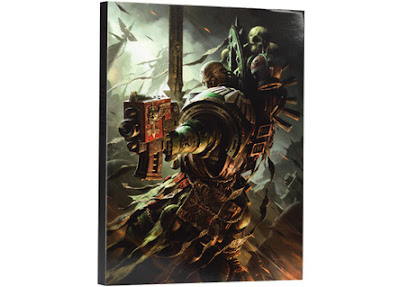 Apparently some people are getting access to the Dark Angels codex, and so I have went through and grabbed as much information as I could, and got it as current as of a couple minutes ago.

- The special rule "Inner Circle" gives hatred against Chaos Space Marines and Courage.
- The table of Warlord includes options to increase the turboboost of bikes, +1 / -1 to the roll of reserves etc...
- Belial can change their weapons as before. And yes, he does make Terminators troops.
- Sammael makes RW bikes troops as, also.
- Azrael gains +2S and AP3 for his sword. makes both RW and DW troops.
- No specific psychic Dark Angels. Ezekiel has a power that is S4 AP 2, D3 shots, I believe.

Deathwing Knights
- +1 To their Toughness if they are base to base.

via Baret
80 points for a 3man bike squad! 27 points for each additional member. They still come with scouts, have special combat squad splitting (3/3 bikes and the AB and speeder separately (so 3 scoring and a vehicle). 126 points base for those fancy command bikes, their plasma is only 18" though..


Termie squads are 210, have split fire rules, can take 10 members with heavy weapons per 5. They are 44 Points for each additional member.

Everything has a version of stubborn.

via Archibald_TK on Warseer
(the one where we got some infos during the SoB WD release). I was reluctant to post them as the other posters in the thread mentioned it comes from a new rumourmonger but after seeing what the German forum says I suppose they may be true (or they may be coming from the same source so salt and all of that)


A brief summary of what we didn't know before:
- Azrael giving 4++ to his squad; has a S6 P3 weapon
- Warlord table gives +1d6 to turboboost distance/reroll running roll to the Warlord unit, furious charge, +1/-1 to reserve rolls, fearless, he mentions one giving "insensible" which I cannot translate as it's not a rule I know, it sounds like the beginning of the French FnP rule "insensible à la douleur" but I highly doubt he was referring to that
- Nephilim close to 160 pts with upgrade, gatling gun same sucky stats as discussed before
- The weapon of the Deathwing Knights champion is +2S AP3 and cannot be switched for something else
- Inner Circle mentioned as being Fearless, Hate (CSM) like in the other rumour
- Caliban Halberd +2S AP2 strikes at Init
- Access to Divination
- He mention later that while he didn't really check for that, the little boxes that you usually see in the army list allowing to switch FOC slots, he only remember them next to the 3 SC

In store atm with the codex. all i said is conformed. bane of the traitor(-1ap vs c:csm in cc) is deathwing knights weapons only .

Neph fighter is 180 with either weapon option

Also inner circle is fearless and PE c:csm
Blade of caliban is str+1 ap3 unwieldy but a lot cheaper then a normal pweapon

Armoury in the codex called the armory of the rock. also small tidbit is all missle launchers can be upgraded to flak apart fron the whirlwind which got screwed. also dev squad are super cheap. 5man squad with 4 multi meltas 110pts lol

Are the fixed numbers 5-man for Deathwing and 3-man for Ravenwing?
Correct 5&3


Black sword missiles S6 AP4? It wasnt the megabolter with these stats?
both have those stats. bolter r48 missles r36 also rhe fighter has missle lock spacial rule i. the army list but has no blast missle. some silly mistake as it makes no sense we hope


do Land Raiders have to pay extra to get the deathwing vehicle rule?
30 extra and has to have it

No storms. no homers on scouts.chaps &libs can take bikes. only gramd master unlock troops. can have a techmarine per hq taken


Do standard bikers have Skilled Rider?
Nope only black knights


Veng strike gives all models twin linked shots the turn they deepstrike
smite is str+6 ap2 one use. Doesnt say if it to one attack or all that turn.
The fighter has missle lock in the points section at the back but does not have any blast missles so must be a mis pri t.
The deathwing vehicle rule is just anotber name for venerable


If it says something like “Once per game the DW knights can make an attack at ……….” People would start questioning is that in addition to normal attacks? Does it get used for all attacks? Does it replace their attacks with one attack?
Here’s hoping we don’t need to argue about it for 2 months…….
It has its own sub profile str+6ap2 melee one use only


What about named characters?
Same old 5. Some new rules like azrael can choose his warlord trait from the 6 new ones. unlocks both wings as troops. also him or belial lets you not scatter with his unit when deepstriking. had to leave and there was no way to sneak the book out the store

oh and samiel is the only eternal warrior again