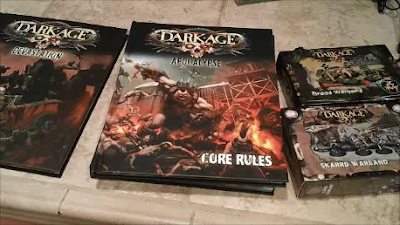 This weekend and quite a bit of last week, while taking on the Dark Angels release, I was learning the rules for the miniature game Dark Age. In fact, this weekend I was able to get in a good number of games....9 I think. It does help that the average 500pt game only lasts about 45 minutes.

What is Dark Age? Dark Age is a tabletop miniature game. The game itself is a skirmish game, that uses a d20, with lower rolls being better and 1's being criticals. (20's critical failures). The game is played on a 4x4 tabletop with forces that number about 10 models or so at 500pts (which should last about 45 minutes).

Each army is very different, and far from your typical standard fantasy or sci-fi setting. The artwork and many of the models are based off of Gerald Brom's artwork, and the models themselves closely follow the artwork.

Of the games I have gotten in, they have been very fun, and very dynamic in how the combat plays  out. You can literally charge a unit, drop them dead, and then continue through them to attack further units.

A brief setting run-down. Mankind and the United Worlds had spread across countless systems. One of the planets in a far out fringe world was called Attr was classified as uninhabitable, even though it fell within the stars habitable zone. The exact wording falling along the lines of "non-conductive for human habitation." The notes placed the atmosphere at marginally acceptable levels for short term stays.

Corporations and other entities quickly moved to the planet for mining and other hidden research due to some of the planets riches that could be exploited. All that changed though, when mankinds reach suddenly collapsed. Those high ups that knew what was going on, quickly fled the planet through the one large spaceport, and everyone else, slaves, etc, rioted through what was left. With no more supplies coming, the inhabitants were doomed.

Mobs rampaged through the ports, desperately trying to get off the planet, and what food supplies and more where left, were consumed, and those that were left, well scavenged and killed for survival.

The Forsaken
Dark Age is set centuries later after this apocalypse, and mankind is just now pulling themselves up out of the ruins. It seems that religion was rediscovered and it spread through mankind like wildfire. The religious fanatics known as the Forsaken inhabit the ruins of the space port and push outwards into the wastes to bring civilization to the tribes.

Outcasts
The humans in the wastelands and beyond are called outcasts by the forsaken, which to those that live there is a precious freedom from the zealotry of the Forsaken.

The Skarred
The Skarred are fugitives from the port city, that fled out into the great expanse into the ruined laboratories and settlements that were left behind centuries ago. They are the "Devils wearing the skin of men" and have been exposed to centuries old mutagens and experiments which they have embraced.

Dragyri
The dragyri are an alien species that brought slaves to the world centuries ago to mine precious minerals. The slaves of so long ago are now the masters, and the old masters frail and much smaller became the slaves. The Dragyri are shamanistic with a strong caste system, with each caste tied to one of the elements.

The Brood
Deep in the swamps, the brood are the results of genetic research and experiments,brought about by the highly mutable bio matter of the marsh. Over hundreds of years, the brood create and spawn new creations to deal with the threats of the outside world.