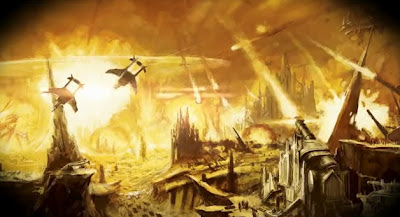 It looks like the flyer rumors are coming in again full swing with a new bit claiming a flyer supplement to be released in a couple short weeks. "Death From the Skies" seems to be the title, but we will see, as more information on flyers hopefully are forthcoming in the next week or so.


Please remember that these are rumors. Salt required.

via Kroothawk
A new 40k supplement book will be released on 16th February:
"Death from the Skies" (26€, mail order only, chance of being in English only).
More when I know more. But it certainly sounds like a flyer supplement.


via DarkWarrior1981 on Warseer
This is not as exciting as people may think. I saw the advert for the book at a local store; It contains only rules for fliers still on sale or with a codex entry (the Dark Eldar bomber is in), some fliers have their rules updated to 6th edition (whatever this means exactly). The only thing actually new is, that the Stormraven is now available to Codex Space Marines and Black Templars as well. Also you will find the flier rules from Crusade of Fire and new missions. The book will be on sale (no pre-order) from 16th of February, is direct only (so not from your FLGS), english language only and will not be limited stock.