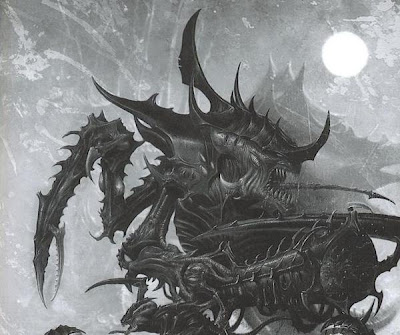 Tyranids. Seen much of these lately on the tabletop? Not so much for a while now, but they are still out there. Here are a few rumors giving us a loose time frame for a codex release, as well as some new units.


Please remember that these are rumors, early rumors at that, so please apply as the author mentions.

Kit released for harpy that will make a second FMC - current playtest name hydra.  Harpy will remain anti-infantry, hydra to be anti flyer/vehicle.
Synapse will go back to giving eternal warrior - and instinctive behavior will be radically changed.
For other new kits - nothing major.  Prime plastic kit, shrike upgrade pack, and lastly, a new MC that is built off of infiltrating and will have a snacking rule similar to the fantasy ghorgon.

next two Rumors should be taken with even more salt then normal - there will be multiple large plastic kit that is a multiple option kit that can make warriors/zoanthropes/lictors, one that can make venomthropes/raveners, and one that will make biovores/pyrovores and one for tyrant guard/hive guard.  The finecast models are getting changed up a bit - will move to plastic.  Also, some of these kits may be condensed into one box.  Secondly - Ward is writing the dex.  Extra salt here folks - extra salt.

Once again, keep in mind this is a long ways off and these are playtest rules.