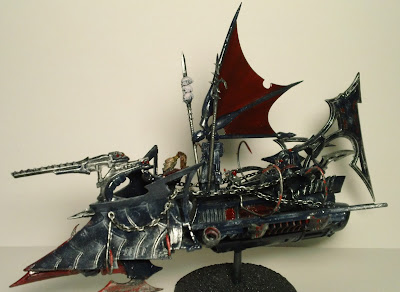 I am just starting to get organized and back into my projects (from after my move), so the first thing I wanted to hit were my Dark Eldar Raiders. They are a project I started quite a long time ago, and I finally have some inspiration to get a move on them. 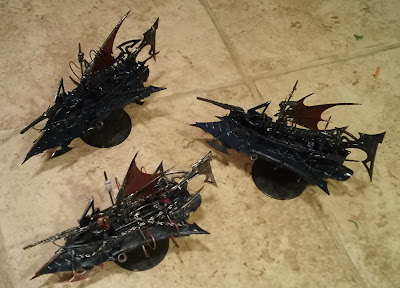 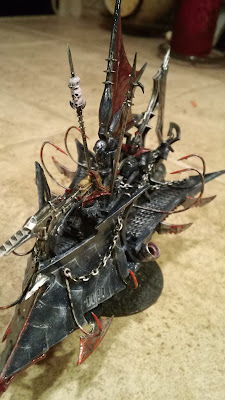 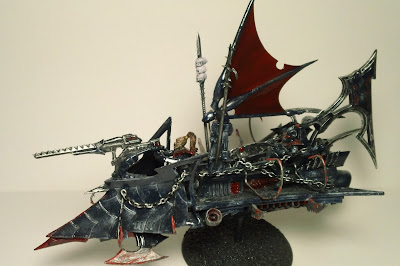 To start with, these are old school raiders converted to merge both aesthetics of the 3rd edition raider into the new, hopefully for a new look. I have heavily cut apart the original raiders, and added some serious hardware in the forms of hooks and chains along the platforms and front of the raider. Yes, I had decided some time ago that I would use real hooks. After-all if a Dark Eldar Warrior must use sharp barbs and hooks to hold in place his armour, the raiders should carry the same look and feel.

There are a couple bits from the new raider that have made it onto my finished project, and that is of course some of the spears and sails, a big thanks to Brian for donating a decent number of them. I am still looking to pick up another 8 sails and will probably just get them on ebay if I cannot find them locally. Other than those two pieces, the rest of the raider is made up of parts from cut from the old one.

As for the safety of the models..... "dont touch my models". Its always a pain when passerby's pick up models to take a look at them. (people that do this show a complete lack of etiquette). But really, the hooks all face inwards and are bent down at the point, so they look much more dangerous to hold than they really are.

For those of you that have been following this blog for a long time, you have seen my raiders before. The primary difference is that I removed the crap sails I made myself, and added in some new ones alongside a few other misc bits (like the spears).

I plan on finishing the lot of my vehicles as soon as I can. 15 Dark Eldar custom vehicles (raiders, ravagers, and a couple venoms), and I need to find a couple more old school ravagers to complete my collection.