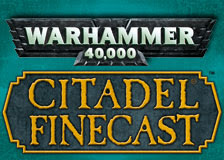 This rumor bit declares that Finecast resin models from Games Workshop is meant to only be a temporary stopgap between the high cost of metal models, to a complete conversion over to plastic in the near future. Of course that near future might be 2-3 years out, but that is near enough for me.


This conversation was collated by Kroothawk. I did edit out the drama from the quotes. (that kind of negative melodrama is really only ever needed in Soap Operas, and I am saving readers from it) Its not often I remove parts of rumors, hence the explanation.

Please remember that this is a rumor. Salt required.

via faj3r over on Warseer
I heard, from reliable source, that all finecast are going to be mail-order exclusive (my source gave it as a fact)

Comment was that it's possible, that the're going into plastic with characters - instead of finecast and metal - because it's cheaper and technology of plastic miniatures they have great these days (that I think is my source speculation)

via 75hastings69 on Warseer
I have HEARD via my sources that finecast has pretty much been recognised as not fit for purpose, and within the timeframe I gave in that thread it is as Starfarer suggests that GW will go pretty much 100% plastic.

They are presenting (or getting together the presentation) that FineCAST was only ever a stop gap, and that plastic is the real future.....

Plastic may well be the future, but not if its all angular CAD sculpted soul-less crap, with increasingly less detail..... that's not the future,

Plastic is my medium of choice, so I applaud a move to all plastic.

This all plastic rumour shouldn't be attributed to me, I'm just passing on what I've heard.

A week ago, on 18th January:
via 75hastings69 on Warseer
There is however a long term goal, although its a bit shorter now and should be seen in the next 2 - 3 years if my sources are correct  FineCAST is not work in progress it's a live product that is on sale to the public, it was work in progress for the minimum 8 months before public launch that they were meant to be testing it!