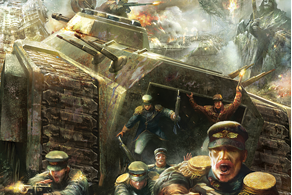 It seems that we are starting to see the rules from early releases of the codex being shared online now. Chimeras have some interesting new rules, Fire on My Target ignores cover, there is a way to get 3 special weapons on veteran squads, and more.


Lets take a look, but remember that these are not released yet, and there is most likely some errors that could occur. Please take these as rumors.


via Inquisitor on Dakka Dakka
So I went and got my box of scions a week late..AND I got the Codex! And I do mean Codex: not the French translation or whatever, no, the real English codex!

chimeras DO come with searchlights and smoke launchers. 2 models can fire from the hatch (Heavy weapons count as a bulky model) and 6 models can fire the lasguns on the side, called lasgun array (one on each side) They can fire at a different target as the chimera's other weapons, but all 3 on one side must fire at a single target..AND it ALWAYS fire at the chimera's BS value..so bummer for Vets, but short of having a crew stunned/shaken, you're firing BS3 instead of BS1.

Commissar rules about the execution is real: 1-2 opponent choose, 3+ you pick.

Fire on my Target now grants ignore cover instead of re-rolling successful cover saves. Bring it down gives monster/tank hunter instead of twin-linked.

Officer order range is 12inch for both senior and junior. Senoirs get 2 orders/turn instead of 1.
Creed gets 2 Warlord trait, that you can roll in 2 different warlord chart if you want.

Straken gets automcatically the one granted relentless; Harcker lost feel no pain (T3 blargh) but is also relentless (and no word that only he's got it, so you get a squad of relentless vets)

Heavy flamer, and (har har!) if vets don't take it, they can still sport 3 Special Weapons instead of 2.

Ratlings can now shoot and run in the same shooting phase.

Heavy Weapons team, but since you MUST take 3 heavy weapons, the cheapest being mortarsthere's no price change.

I skimmed the fluffly part, they seems to talk about Cadian/Catachan, the other regiments got that blurb that was in WD.