Wyrdvane Psykers: Because I Just Can't Leave it Be 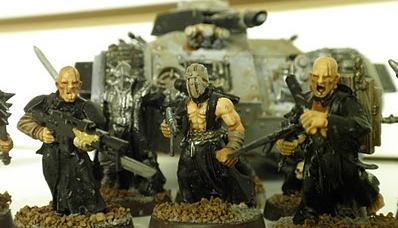 After the post a couple nights ago, I thought it was time to sit down and see what I can do with Wyrdvane Psykers and see if I can find a use for them on the tabletop. Well, its not all bad. This is how I see them being used...


First off, Wyrdvane Psykers are kind of a problem unit. Lets get this out of the way. The Primaris Psyker is just more point efficient and is an independent character. So for those of you saying that Wyrdvane Psykers will get more wounds...... how many of you run your independent characters by themselves (just join them up to a unit and there are your extra wounds). So yes, Wyrdvane Psykers must have another purpose on the field rather than Divination casting. After all, if you really really need more Prescience than the 3 primaris psykers give you...... just get two additional inquisitors and your done.

So here it is. How I plan on testing my Wyrdvane Psykers is to throw them in a Chimera. I am going to need 7 of them, as there are 2 banks of 3 lasguns to man. The 7th launches out the firing port up top. So now that I have that established, I am not going to take divination. After all I want to fire out of the top hatch, which requires a witchfire power. Biomancy gives us smite as its primaris power, which is a 12" S4 AP2 Assault 4 witchfire.

Throw in a Primaris Psyker with biomancy, and wow, your shooting 8 shots S4 AP2 out of the top hatch. Upgrade the Primaris to level 2 and add in a divination power for prescience, and suddenly your squad inside the chimera is it putting out some good anti infantry firepower. Not to mention the lasguns on the sides, which I am assuming would still get to re-roll their shots.

There are some other good powers in biomancy that could help, like Life Leech which is S6 AP2 Assault 2, or Haemorrhage, which is a focused witchfire where the target takes a toughness test or is slain (and possibly more).

So do I see Wyrdvane Psykers ruling the tabletop? No I dont. I do however think that after dropping the "everything has to be prescience" thoughts, that Wyrdvane Psykers can find a role in some lists, and can take advantage of the new Chimera rules.

I will be taking a good number of these guys with me to Valhalla.