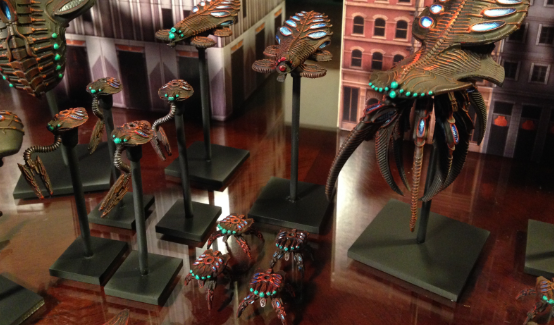 I believe these are the last two unit types out of the rule book and without getting into the recently released models for the Scourge. Over the last several months, I have been playing a ton of Scourge and have narrowed down my tactics and how I use them on the table. These last two units are two that I use, but less sparingly than when I first started playing the army. They are highly specialized, and would benefit from a list that has more than just the token two units or squads that I tend to use.


Corsair Swarm
(Scourge Fast Moving Aircraft)
The ideal is in the second half of the name.... Swarm. I currently own two of these guys, and have tried fielding them together in a squad or on their own many times. The issues come when you find that your fast moving aircraft as a Scourge player do not compete well when they are facing down equal numbers. This is OK though, because against the PHR or Shaltari, you are paying half the point cost for each interceptor.

I tend to use my Corsairs (since I only have two of them), as nothing but interceptors to harass and hopefully take out enemy aircraft. The Corsair is built for this in low numbers. However, bump that up to 4 or 6 Corsairs, and suddenly you have a force to be reckoned with in the air.

The Corsair has an extremely strong weapon on it. Its only one shot, and hits on a 4+, which is its primary downfall. When acting in the roll of an interceptor, and following the flight path of the enemy aircraft, your reaction fire penalty is reduced by one, but still leave you hitting on a 5+. Now if you do hit, the Corsair comes with an E11 shot. So if you do hit your opponent, there is an excellent chance of doing 2 dps of damage. It really is a hard to hit shot, that rips apart what it does hit.

Lets compare quickly.
The Corsair comes in at 68pts. While the PHR Athena sits at 135 (btw probably the best fast moving aircraft in the game). The Shaltari comes in at 108pts, and the UCM has a bomber at 112, and a fighter at 67. None of the enemy guns match the E11 gun though of the Corsair, but only the Corsair has the bad accuracy of 4+ with a single shot.

The first time as a Scourge player facing down Athena Aircraft, your first reaction is guaranteed to be one of shock. "It can do what?" Just remember that for every Athena you face, its the equivalent in points to two of your own Corsairs.

Now besides intercepting..... what do I use my Corsairs for? Hitting ground targets can be tricky with opposing AA guns covering large areas and your 4+ accuracy. Well lucky for you, your Corsairs also have Demolisher 2. Since Buildings are always hit on a 2+, this gives you some extra firepower to drop buildings that need to be taken down with high strength hits.

The use of Corsairs really is going to come down to how you want to play your Scourge. I think its important to have fast moving air in a list, as a smart player will pick off targets at his leisure if you cant at least threaten his air.

Prowlers
(Scout Walker)
Prowlers were probably one of my favorite units at the start of my playing the Scourge. Cheap little walkers that can ruin someones day if they get into base contact with them. If you think you can just run these forward though as fast as you can straight at the enemy to hit the first tanks in the area, you will have to rethink your tactics.

What is a prowler.... A small little walker that looks like 4 legged spider, that runs up to its target (tank), climbs up on its shell, and injects molten plasma directly into the crew compartments of the vehicle with its proboscis. You must be in physical contact to use this weapon, and its the run forward that can result in getting mowed down.

Secondary gun fire is lethal to Prowlers, and since in Dropzone your machine guns can fire at different targets than your turret weapons, Prowlers can go down very fast before they get near a target. Many many games I kept trying to sneak these guys in only to get mowed down by secondary guns (which would have not target otherwise so are just free shots). The issue is armour 5.

Now don't get me wrong, I have had these guys work, and they definitely are a cheap distraction to harass the enemy tanks with, but I really feel that to get full effectiveness out of them you would need more than the 8 I have been using. Lately I tend to use these guys to try and catch isolated units to play cat and mouse with them. This has worked well, and it means controlling the urge to deploy these guys too early. Holding them off for a 3rd or 4th round deployment has caught my last few opponents off guard. After all the Intruder dropships can move 15" and then deploy these guys up to 6 inches away.

When they do work out, they make short work of their targets and Prowlers are extremely cheap, coming in at 9pts each. Their Intruder dropship can carry 4 prowlers and costs 24pts. So yes, that is 60pts each. Not a bad investment.
4/17/2014
Natfka
Dropzone Commander