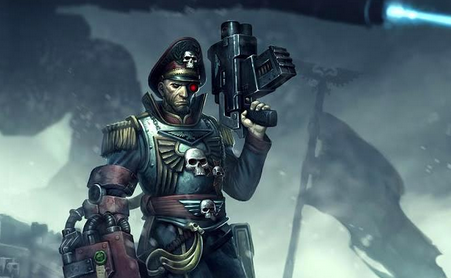 
The last codex had Yarrick sitting at 185pts and for that he was incredibly expensive. A lot of the powers he had did make it over to the new codex. Lets take a look.

Yarrick has a toughness of 4, and his power field gives him a 4+ invul save. Of course he comes with a power claw which is essentially a power fist. While all this is good, and he is 40points less than before, this is not what makes him great.

Lets start with my favorite, and this is his Warlord Trait. Draconian Disciplinarian. This rule means that any IG unit within 12" does not need to test for morale for suffering 25% casualties. This is plain awesome, and gives Yarrick some unique opportunities. In a platoon with heavy weapon squads, or even conscripts and combined infantry squads, these units will stay under the heaviest of firepower.

The downside of this is that Commissars come with a new rule, and cannot be Warlord if another unit has the Senior officer rule on them. So if you want Yarrick as a Warlord, you cannot take a Command Squad (unless you take Creed who somehow gets the ability of the rule without the rule in name).

Yarrick gets the new Summary Execution rule as well, which we know now is on a failed morale check allows to player on a 3+ to execute a model of his choice for a re-roll. on a 1-2 your opponent chooses.

So besides holding down the fort with Draconian Disciplinarian, Commissar Yarrick is a Senior Officer himself and issue two orders. Combine him with Creed and you have an order machine duo that has a strong center of operations. Orders are really a huge strength of the new Astra Militarum, and Yarrick being able to issue orders is just simply short of amazing.

Yarrick  has 3 wounds with eternal warrior, and if he does go down to the enemy, he has the Iron Will rule that he had in his last codex. So yes, after taking his last wound, he gets back up on a roll of a 3+ and continues the fight.

Here are some thoughts. Throw him behind an aegis defense line with a combined squad of infantry squads. Throw Yarrick on the Quad Gun or Lascannon, and make sure you put a vox in his squad somewhere. This could give Yarrick like 20 or more guardsmen to keep your Warlord alive. Not only that but he can give re-rollable orders since there is a vox in his unit. Throw some Heavy Weapon Squads behind him (within 12 so they cant  break due to casualties)

Conclusions.
So Yarrick just screams take me, and I think he will find his way into a lot of new lists. He brings a full compliment of special rules, senior orders, and he is that special someone that sits among your firing lines, giving it some durability and strength. All of this for a nice 145pt package.
4/20/2014
Natfka
40k, 6th Edition, Astra Militarum, New Releases, Warhammer 40k